Frostsnow https://frostsnow.com/
Home Gossip How Much is Marcus Lemonis's Net Worth? Know About His Salary, Awards and His Career

How Much is Marcus Lemonis's Net Worth? Know About His Salary, Awards and His Career Marcus Lemonis, born as Marcus Anthony Lemonis is an American businessman, investor, television personality, philanthropist, and politician. A tough competitor to American businessman Steve Wynn, Marcus, besides being the star of the CNBC reality show The Profit, is also the chairman and CEO of Camping World, Good Sam Enterprises, Gander Outdoors and The House Boardshop.

Lemonis, who has not revealed much about his personal life is regarded as one of the wealthiest businessmen in America. So, how much is his net worth? What about his salary from his reality show? Let's know all about Lemonis salary, house and net worth in this section.

How much is the Net worth of Marcus Lemonis?

The 44-years old entrepreneur's net worth is not announced officially, however, he is estimated to have a net worth of $900 million. Well, that's a big sum of money. But his massive net worth is not an easy money, instead, it's an outcome of his hard work and passion for his work. Let's get to know his career in precise.

Marcus, who had been exposed to the automotive industry as a child eventually took his first step into the field 1997. He started his career performing sales and managerial roles in AutoNation. Following this, Marcus served as the CEO of Holiday RV Superstores Inc. from June 2001 to February 2003 and later merged his company with Camping World and with Good Sam Enterprises in 2006 and 2011 respectively.

Besides his investment in the Camping World, Marcus also utilized his money in Rose's Bakery & Wheat Free Cafe. Marcus reportedly signed a check of $200,000 to own the business from the previous owner who was about to close the firm of bankruptcy.

Further, Lemonis also agreed to invest $150,000 for next 18 months in the bakery which was set to close on the Christmas eve of 2012. Later in March 2014, the bakery established its chain in a second location in Highland Park, Illinois. However, the yearly income from the business is not disclosed.

The main sponsor of the NASCAR World Truck Series camping, Marcus, in October 2016,  made his Camping World public in the New York Stock Exchange with the value of $22 per share, marking the market value of company approximately $2 billion.

Have a look at Marcus' celebration after making Camping World in the NYSE.

As per the report on May 1, 2017, Marcus Lemoni's company traded above $31 per share. That's a business mastermind.

Lemonis, who became the star of the CNBC reality show, The Profit in 2013, reportedly invested $35 million on the show. The show provided the revenue of $100,000 leading him to loss of approximately $4 million.

In the TV show, Marcus Lemonis offers struggling small businesses capital investment and his expertise in exchange for an ownership stake in the company. Lemonis, on the 2nd episode of the 5th season in November 2017 offered a deal of $3 million loans to Tumbleweed Tiny Homes for 75% of the equity.

Unbelievable moments of the show, The Profit

Marcus Lemonis lives in Chicago, Illinois with his wife, Ila Lemonis, but the couple has not given any detail about his current home and his children. But, we do have information about the home they sold in the past.

The  French Normandy-style house was built in 1931 and was remodeled by Poulton Group in 2004. The house featured five bedrooms, seven baths, a home theater, exercise room, sauna, and large wine cellar.

Well, that's not the only house Marcus owns. Marcus reportedly bought a house in Montecito, California (CA), the US in the beginning of 2017. The property built in 2 acres was bought for $6,850,000 from British financier and car collector, Andrew Pisker.

Marcus Lemonis is also the owner of 1-800 Car Cash. Marcus, who invested $200,000 in the company owned by brothers Andrew and Jonathan Baron took the 100% ownership stake making the former owners licensees of the company.

Marcus also owns a private jet, however, he has not revealed the details.

The entrepreneur, who has invested over $1 million in the company, has opened up 70 locations for Car Crash and reportedly make a profit of $2000 per car.

Lemonis also shot the commercial for Jaguar F-Type. He shared the news on his Twitter. Have a look.

Shooting the new commercial for the @JaguarUSA F-Type today pic.twitter.com/5dg6vlpiPb

Marcus Lemonis, A Generous Person In addition to Businessman

Marcus as a successful businessman is also active in charity works. Marcus donated $300,000 to Marquette University in 2016 with an aim of raising $1 million to support student scholarships.

In 2017, Marcus also donated $1.5 million to fulfill the target to raise a fund of $3 million. The $3 million is aimed to be used to start a student-run business program.

Talking about the awards received by the successful businessman, Marcus Lemonis has been gifted a beautiful life as he was adopted during his infancy by Leo and Sophia Lemonis. Marcus with his career struggle got named Newsmaker of the Year by the RV Business Magazine in 2007.

The Entrepreneur of the Year 2008, Marcus was also awarded Silver Cradle Award in December 2017. The prestigious honor is presented to the companies that support their employees by offering generous adoption benefits.

Have a look at the picture; Cradle President & CEO Kim Perez presenting the award to Marcus. 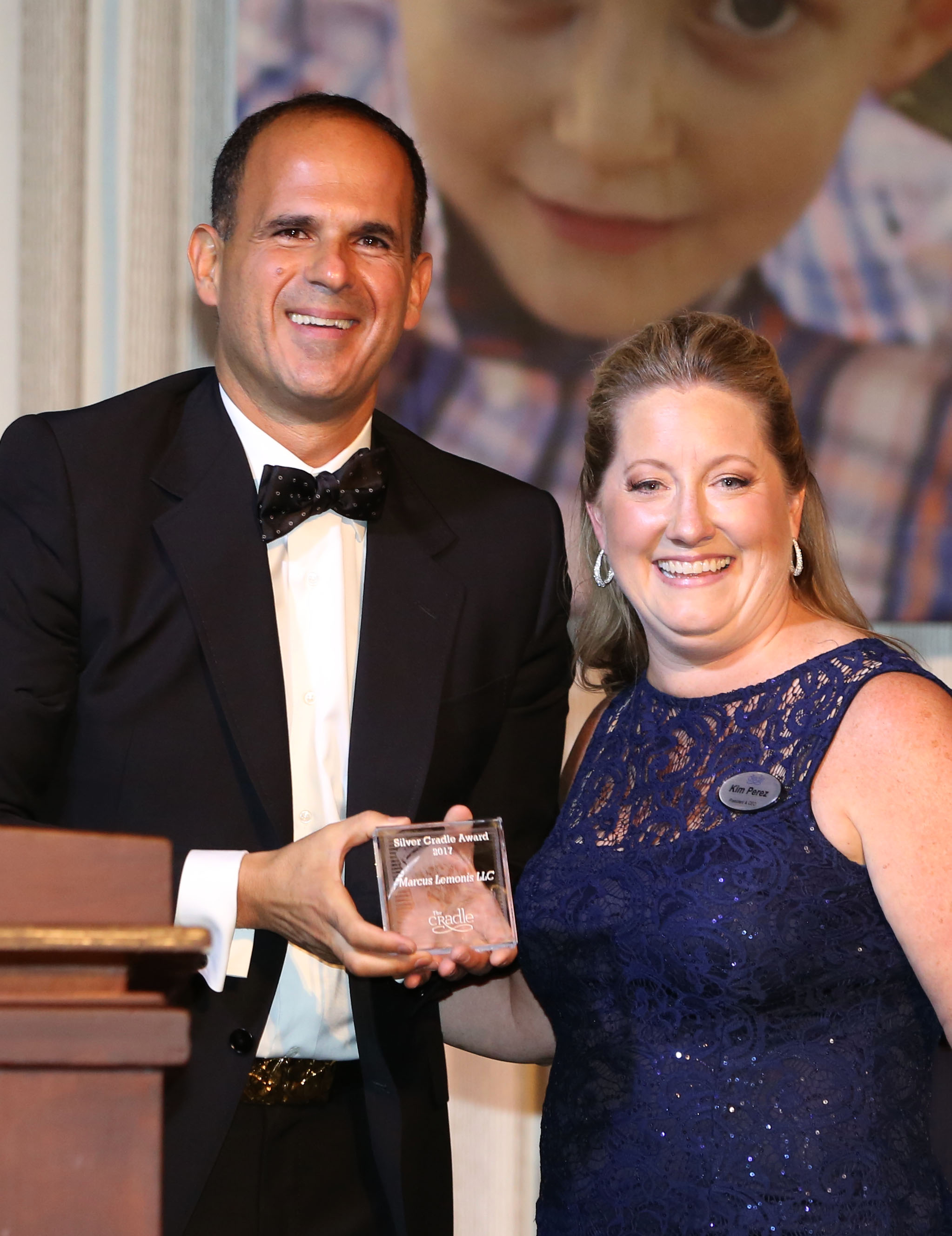 On May 8, 2017, CASA Lake County awarded Marcus the 2017 Terri Zenner Award Honoree for
his dedication to children and youth development.

Let's wish him best for further.