Frostsnow https://frostsnow.com/
Home Gossip How much is Kim Zolciak & her Husband Kroy Biermann’s Net Worth? Find out their source of income

How much is Kim Zolciak & her Husband Kroy Biermann’s Net Worth? Find out their source of income

Kim Zolciak and her husband Kroy Biermann are a perfect match for one another. But they are better known for their high net worth and for buying extravagant things. The pair who is married since 2011, appears to share a combined total net worth of $7 million.

Among the given combined net worth, $1.5 million is Kim’s while $5.5 million is her husband Kroy’s. Kroy earned such a huge amount from his footballing career as he receives $2.5 million as an annual salary. According to the report, the pair is totally dependent on Kroy's NFL career. Let’s find out the truth and the pair’s source of income.

Kim’s husband Kroy worked for several years with Atlanta Falcons before joining New York Buffalo Bills. This became a great benefit to the pair as Kim boosted her reality television ties and Kroy got the opportunity to work with the highly-rated Buffalo Bills.

After signing the contract with the Buffalo Bills, Kroy gifted Kim a gorgeous $100,000 worth diamond ring. She didn’t miss any chance to show off the huge rock on her social media.

Kim and Kroy had such an outstanding wedding that most of us might have only imagined in our dreams. The couple lives in a mega-mansion in Atlanta. The huge house consists of a luxurious swimming pool in the yard which looks more like a beach club that consists of fancy lounge chairs and a huge patio.

Moreover, Us Weekly claims that there’s even an elevator that transports Kim and her red Solo cup cocktail from one floor to another.

Zolciak and her husband bought their home for just $880,000 in 2012 and added a lot of new features to it. The mansion is constructed in about 17,000 square foot of area and features a theater, a basketball court, a man cave, a gym, and a spa as well.

Kim and Kroy are parents of six children. The pair gives their children a very luxurious lifestyle. They have their own personal chef, nannies, and stylists. If you are wondering how Kim and Kroy afford so much of expenses, then here’s your answer.

Kroy is a very successful and talented American footballer outside linebacker, who is a free agent at present. He earned a lot of money as a footballer by working with various clubs, wins, brand endorsements, etc. He is still a contracted member of Buffalo Bills. He made a lot of cash when he signed the contract with them on 15th August 2016.

Kroy’s wife Kim became famous after appearing on Bravo’s Real Housewives of Atlanta. She is really active in building her company as she frequently promotes her own new product lines. She also posts other products through her social media. She has her own reality show named Don’t Be Tardy.

Also, read about Kim Zolciak quitting 'Dancing With the Stars' 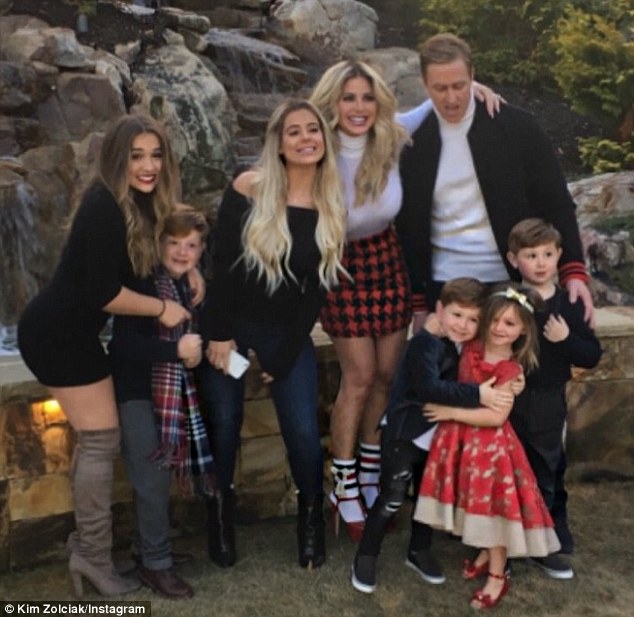 Kim Zolciak with her husband Kroy Biermann and their children

This is how Kim Zolciak and Kroy Biermann is making money and living their luxurious lifestyle. If this doesn’t make you jealous enough, you should check out the pair’s Instagram. Singer Adele Married Boyfriend Simon Konecki, Mentions Him As Her Son's Father At The Grammy 2017