Frostsnow https://frostsnow.com/
Home Gossip How Much Is American Model Bella Hadid's Net Worth? Her Salary, Career, and Lifestyle

How Much Is American Model Bella Hadid's Net Worth? Her Salary, Career, and Lifestyle The American fashion model Bella Hadid, who won the Model of the Year: Women title in 2016 has a net worth of $12 million as estimated in 2017. Gigi Hadid's younger sister is the face of the popular watch brand, Tag Heuer. The 21 years old model has walked for Tommy Hilfiger, Diane von Furstenberg, Marc Jacobs, and Jeremy Scott.

Hadid's debut walk was in the New York Fashion Week in 2014 in which she walked for Desigual and after a year in 2015, she modeled for Tom Ford in Los Angeles.

Later in the year 2016, she featured in numerous magazine covers including Vogue, Glamour, British GQ, and also starred in the Tyler Ford's short film, Private. The same year she became the new ambassador of Dior Makeup line.

The Victoria's Secret model, Hadid was the 2016 Model of the Year at the GQ Men of the Year Awards in London. The daughter of Mohamed Hadid is playing in millions as her net worth is over $12 million. The major part of her income comes from her modeling career and endorsements.

Besides, She has also appeared in the tv series Real Housewives of Beverly Hills and has also been in Keeping Up With the Kardashians.

?????? Vogue Spain September Issue ! Absolutely crazy! Thank you @patrickdemarchelier @ondineazoulay I appreciate you so much! Shot in the streets of Paris! Xox??????

Bella was also recorded in the Forbes, "The World's Highest-Paid Models" 2017 and was ranked 9th with a salary of $6 million per year while her sister Gigi was at number 5 out-earning Bella by $3.5 million and Kendall Jenner was the World's Highest Paid Model of 2017. Talking about Kendall's income in 2017, she earned $109.5 million just in a year.

In 2015, Bella featured in The Weeknd's music video, In the Night as Bella and the Canadian singer began dating the same year and later after a year, the couple broke up due to their divergence schedules. Besides, she has also appeared in the music videos of Jesse to Stark songs, Down Your Drain and Baby Love.

As a fashion model, Bella has walked for Chanel, Mercedes-Benz Fashion Week, Versace, Dior and also featured in the 2016 Calvin Klein global campaign. Her major income is mostly generated by her endorsements and deals with different luxury brands as she is the ambassador of Dior Beauty and also the face of Tag Heuer. 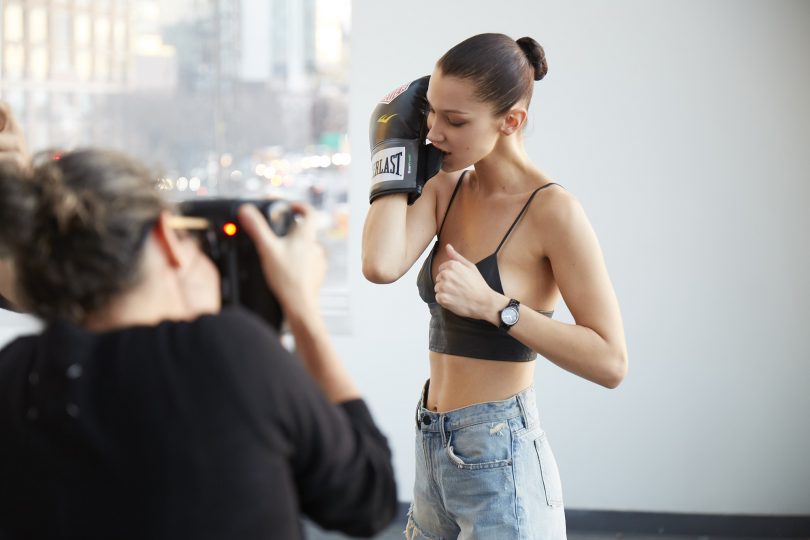 She was also announced the new face and ambassador of the Italian brand Bulgari's accessory lines in February 2017. We must say the year 2016 and 2017 was a very successful year for Bella Hadid.

Bella Hadid along with her sister Gigi grew up in a custom-built mansion in Beverly Hills which their father Mohamed designed by himself. The mansion features 35,000 square-foot area with 2.2 acres of land and was on sale for $85 million in October 2017.

The mansion also has its own home theatre, a walk-in wine cellar, leather-furnished card room, a ballroom and a swimming pool.

Bella currently lives in the Third Avenue in NYC's East Village where one bedroom apartment sells for about $1.3 million and two bedrooms for $2.2 to $3 million. She owns a condo complex with lots of windows and her complex features a gym and a roof deck. Talking about her cars, she went to Fashion Los Angeles Awards in her Bentley. She also drives a Range Rover.