How Is Niki Lauda's Marital Relationship With Wife? Also Know His Past Affairs & Dating History Australian Formula One driver Andreas Nikolaus "Niki" Lauda, or simply known as Niki Lauda, has been married twice. His first marriage was with  Marlene Knaus in 1976 but they got divorced in 1991. Later on, he married Birgit Wetzinger in 2008 and has twin children, Max and Mia with her.

The three-time F1 World Drivers' Champion had the near-death experience when his Ferrari crashed at the 1976 German Grand Prix. However, he survived the fatal accident and is currently living happily with his wife Birgit and children.

Today, we are going to share the details of Niki's married life with Brigit and his former affairs. We will also be sharing the information about his rivalry with James Hunt. Continue reading.

The 69-year-old racer is currently married to his 30-years younger wife Brigit. The two married in 2008 after dating for 3 years. Prior to being known as Mrs. Lauda, Brigit was an air hostess for the airline owned by her husband.

During their early stage of dating, Lauda suffered a kidney problem after the kidney he received from his brother several years before failed. When his son from marriage with Knaus, Lukas' kidney didn't match, Brigit decided to donate her kidney to her love. 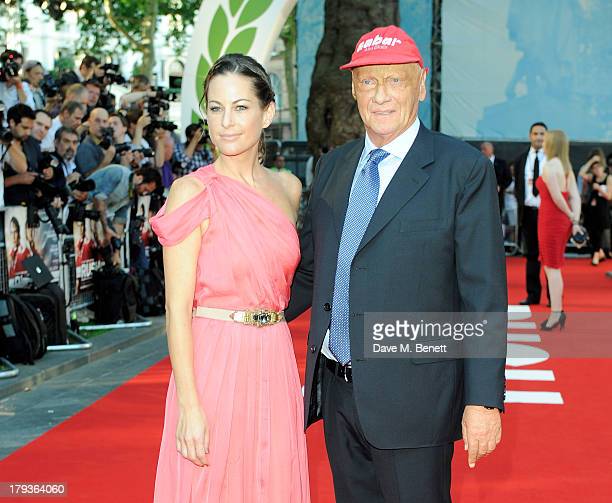 In an interview with sports reporter Graham Bensinger, Lauda said,

"I married her, not because of the kidney donation, but because she was the right woman to marry. And then we got twins, Max and Mia. I was really lucky to have all these things happen."

Due to his racing career, Lauda missed the childhood days of his sons Mathias and Lukas. However, he is now enjoying his fatherhood with his 9-year-old twin son and daughter.

Past affairs of Niki Lauda

Talking about his former affairs, Niki was married to ex-wife Marlene Knaus for 15-years. It has also been reported that Niki broke up with his then-girlfriend when his eyes met Marlene. The racer and the fashion icon were the perfect couples at that time and were blessed with two sons.

But as they say, nothing lasts forever, the couple parted ways in 1991 due to unknown reasons. Although they have separated, the former husband and wife still share a strong bond and are often spotted together in family get-togethers.

Other than his former relationship with ex-wife, Niki was involved in an extra-marital relationship and has a son named Christoph from the relationship. The name of Christoph's mother hasn't been disclosed.

The rivalry between Niki Lauda and James Hunt

During his racing days, the Austrian racer's biggest competition was considered to be the British born James Hunt who passed away on June 15, 1993. The  Formula One World Champion in 1976 died due to a heart attack.

The racers' rivalry was depicted in the biographical sports film Rush released on 13 September 2013. The movie stars Chris Hemsworth and Daniel Brühl playing the role of Hunt and Lauda respectively.

Formula One legends, James Hunt and Niki Lauda go head to head in ‘Rush’.
Which movie based on a sport is your favourite? #PLEXTales pic.twitter.com/zOMfh8UlwQ

"I Wish James Hunt could have seen Rush."

Watch the trailer for the movie Rush

Even though Hunt and Lauda were characterized as arch rivals in the movie, in reality, both of them were good friends and even lived together during their starting days.

Upon Hunt's death, Lauda expressed his grief as,

"When I heard he'd died age 45 of a heart attack I wasn't surprised, I was just sad."

Hope that the blue-eyed Lauda marriage with wife Brigit won't end like his first one did, and we wish him best wishes for his happy and blissful life.