The singer of the hit single ’ The Way’, Ariana Grande has confirmed about her relationship with the famous rapper and producer Malcolm James McCormick aka Mac Miller. The pair was secretive about dating each other but finally opened up about it when asked in the Ellen DeGeneres Show.  Let’s find out more about this hot couple.

The rumors about Ariana Grande and Mac Miller seeing each other began in August as the two of them were seen together for the MTV VMAs. Though Ariana walked the red carpet alone but was joined by her tatted beau inside. They sat together, giggling and snuggling through the awards which showed they had something going on. It was their first official public appearance together.

However Ariana made it official during a visit to the Ellen DeGeneres Show on September 14 2016. She was shy when Ellen asked her about dating the Pittsburgh rapper. Ariana also said that she was happy with Miller.

The duo have collaborated on tracks together including Grade’s 2013 breakout hit ‘The Way’ and Miller’s recently released slow jam ‘My Favorite Part’. In an interview with People Miller told that he wrote that song before he saw Ariana and added that they were very good friends first and foremost. He also told that they made that song and started becoming close and he likes the way things worked out for them.

The pair recently shared the stage to perform ‘My Favorite Part’ and one could see the couple’s chemistry throughout the show as they smiled and smirked at one another. 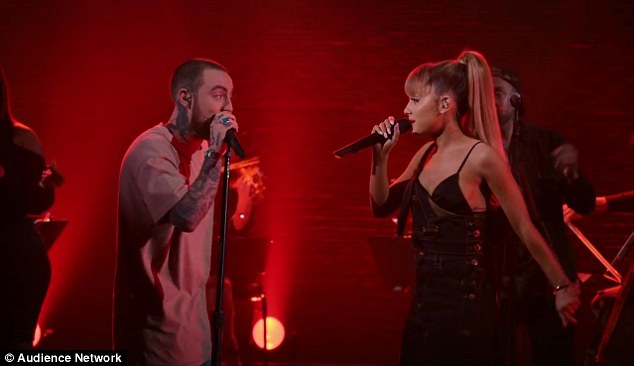 When asked about Grande’s relationship to her brother Frankie he said that he was supportive of anything that makes her happy and told that she is very happy right now.

Ariana and Miller don’t seem to be shy about posting affectionate Snapchat video and photos together though she didn’t want to make a spectacle of their relationship and show of her man on the VMAs red carpet. The couple also recently posted footage of them getting tattoos. However they didn’t get matching tattoos, they did get inked together.

Well by the looks of it both Ariana and Miller seem to be very serious about their relationship. There is no doubt that this pair looks hot together. They stared their love story with friendship and now I think it has grown to be truelove.

Apart from their chemistry with each other we also have heard their collaboration in music and it’s definitely awesome. I am also a big fan of Ariana and can’t wait for them to release more hits together.

Well we wish them all the luck for the beginning of their new relation and hope the thing they have last for a long time.