Holly Marie Combs is off the market as she got engaged to her beau Mike which is great news. Congratulations are in order for the gorgeous actress. When Holly turns her engagement into a wedding, it will be her third as she has been married and divorced twice in the past.

Find out about her previous divorces including one with David W. Donoho and married life. Also, get to know more about her engagement ring and more of her personal life.

The gorgeous star of ‘Charmed’ took to Instagram to share her happiness of being engaged to the world. Holly posted a photo of a gorgeous ring that made us drool all over. She didn’t just post the photo on 3rd September, but her caption read: “Yes. Just yes."

She also wrote on her Twitter pointing at her newly engaged beau. She wrote:

“This means that @mattnathanson agreed to sing at my wedding in twitter world. It's a real thing."

Although Holly Marie Combs had never talked about her relationship status or boyfriend previously, PEOPLE revealed that Mike is the good name of her lover. He can be seen on her Instagram.

It feels great to know that Holly hasn’t given up in love despite being married twice in the past. She seems to be enjoying her new relationship status a lot. We totally believe that her husband-to-be totally gets along with her three sons from her previous marriage.

You might be curious to know about Holly Marie Combs’s previous marriages. Well, actor Bryan Travis Smith was her first husband with whom she tied the knot in 1993. She hasn’t disclosed a lot about her marital relationship with her first husband, but we know that things started getting worse between them as time passed.

After being married for around four years, things did not go as expected. Sadly, the couple divorced in 1997. Actor David Donoho happened to be Holly’s second beau who is also her ‘Charmed’ co-star. They fell in love while at the set and dated for four years before exchanging vows. They got hitched on 14th February 2004 at the San Ysidro Ranch located in Santa Barbara, California. 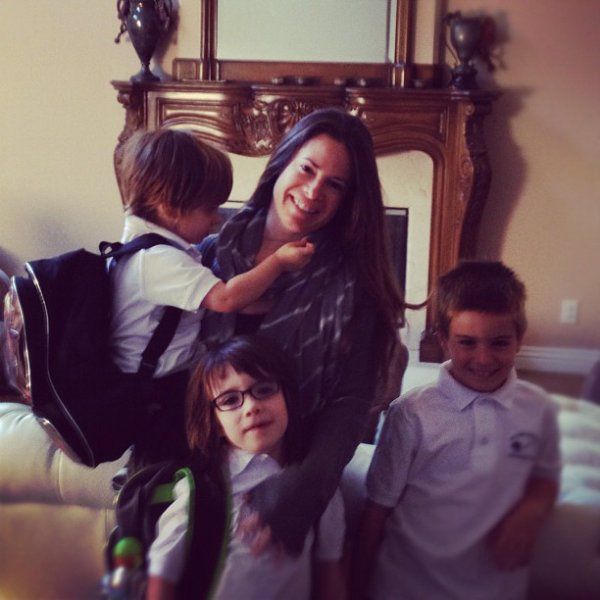 Holly Combs with her kids

The pair welcomed their three sons Finley Arthur Donoho, Riley Edward Donoho, and Kelley James Donoho together. However, they got separated with a divorce that happened in November 2011.

We hope Holly’s relationship with her new beau lasts forever. We don’t wish to see her heart breaking for the third time again, and we’re pretty sure you don’t wish that as well.