In addition to her professional life, her personal life is also talk of Hollywood. She made headlines after getting split with her boyfriend Max Carver. She was also previously in a relationship with Ian Bohen.

Holland Roden's Break Up With Max Carver: Who's She Currently Dating?

We all know that Holland Roden was previously in a relationship with the Desperate Housewives actor Max Carver.

The former couple was co-stars of the television series Teen Wolf and that is where they first met and started an affair. They were enjoying a romantic relationship since 2014 but after two years of dating, in 2016, they had called it quits. 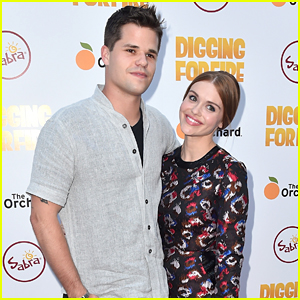 Holland Roden and Max Carver were once a couple

While in the relationship the pair was not shy to showcase their romance to the public. They had often shared photos with each other on their Instagram accounts.

As for now, Holland Roden seems to be single as we don't see her getting involved with a man romantically.

Prior to getting involved in a romantic relationship with Max Carver, Holland Roden dated a number of men. Here's the list of her ex-boyfriends.

As per online records, Holland Roden previously dated Colton Haynes. The duo first met while co-starring in the MTV hit teen drama series Teen Wolf in 2011. They never confirmed thair affair but instead, they joked joke about their hot romance.

Holland Roden had also an affair with That '70s Show actor Topher Grace, who is ten years elder than her. The pair dated for several months in 2012.

Their relationship had confirmed after they were spotted in public.

Following her split with Colton and Topher, Holland started dating her another Teen Wolf co-star Ian Bohen. She is 9 years younger than him. Ian Bohen and the gorgeous Holland Roden taking selfie together

The pair started an affair in 2013, however, their relationship didn't last long and they called it quits just after several months of dating.