Harry Hamlin's daughter Delilah Belle Hamlin: Know all the interesting facts about her in details The famous 19-year old teen Delilah Belle Hamlin is a rising supermodel who has flamed the fashion industry with her charisma. The beautiful blonde has become a new sensation, and she has begun her journey of success in such early age. Delilah is the daughter of renowned actor Harry Hamlin, and she has been getting strong support from her father for every step in her life.

Delilah’s career and her net worth are sure to rise steadily. For someone whose parents belongs to the same root in which she is trying to fit it, we don’t believe it is a hard job. Find out more about the rising star and some interesting facts about her.

She rose to fame as she is the daughter of actors Harry Hamlin and Lisa Rinna. Her mother, Lisa is one of the Housewives of Beverly Hills TV show, and Delilah even appeared on that show with her mother along with Gigi Hadid. 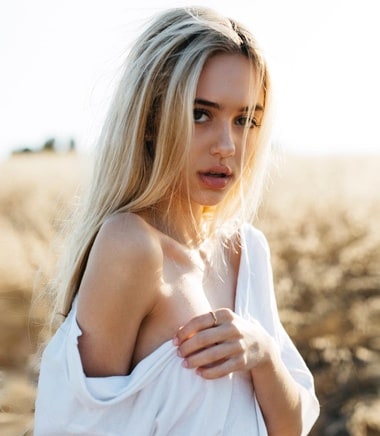 She has a dream to walk in Victoria’s Secret runway just like her mentor, Gigi. Delilah says that it was Gigi Hadid who taught her how to walk on runways.

Elite Model Management signed the 19-year-old beauty in the summer of 2016. After that, her career took a whole new turn. Till date, she has walked on the runways of many fashion shows including Milan Fashion Week.

Delilah Belle Hamlin on the runway

Moreover, she has done several photo shoots and appeared in many fashion magazines like Vogue.

Just like her career, Delilah’s social networking profile is on the rise as well. She has over 350k followers on her Instagram. Well, reports say that she could be the next Gigi Hadid. However, it is not just Gigi that Delilah is compared with. Her relationship with her sister Amelia is over related to the Jenner sisters, Kylie and Kendall.

Read more about how rich is Kendall Jenner.

happy birthday to my twin and apparently older sister? This 16 year old looks older than a 19 year old which is crazy to me?? I love you @ameliagray ???????

Delilah seems to be organized and happy with her life as she is managing both her modeling career and her studies as well. Delilah has gotten into a school in New York and she seems to be really determined about her ambition. We know she can do it.

Since July 2014, Delilah has been in a relationship with her her high-school sweetheart, Aidan Reilly, who is a water polo player. Their dating life appears to be going well as they seem happy in love with each other. There are no rumors about their split or any other gossips.

The pretty blonde daughter of the famous parent seems to be having the time of her life by growing as a successful model along with her strong willpower to achieve her dreams. Our best wishes are with her.