Television personality Giada De Laurentiis is a renowned chef and writer. She is a very talented lady who hosted Giada at Home, a Food Network show, from 2008-15. Gorgeous Laurentiis was married ta fashion designer Todd Thompson in the past. The couple was married for a long time. However, the couple got separated in a sad divorce.

In the past, Giada De Laurentiis was rumored to be dating celebrity chef Bobby Flay. However, she denied the accusations of her relationship with Flay, but rumors have now re-surfaced, claiming that she is marrying Bobby Flay, following her divorce with Todd Thompson Let’s find out more.

Giada De Laurentiis tied the knot with her ex-husband Todd Thompson on 25th May 2003. Laurentiis’ relationship with her former husband appeared to be going great to the outsiders.

However, according to rumors, something between them went wrong. Despite being married for so long, Laurentiis announced her separation from Thompson on 29th December 2014. The pair’s divorce got finalized only on 3rd September 2015. Giada De Laurentiis opened up in an interview about the pain that she had to pass through during and after her divorce. She said:

I had a rough year and a half, no question, but I think that all of us go through stuff. I checked out for a little bit. I tried to stay under the radar to protect my family and my daughter [Jade], mostly. But now I feel like I've turned the corner.

I think that the pain was so raw for so long that I just felt like I couldn't [even talk about it]. I think that everybody takes their time to get over whatever it is they need to get over.

Talking about Giada De Laurentiis’ children, she has an angelic daughter with Todd Thompson. Her daughter Jade Marie De Laurentiis-Thompson was born on 29th March 2008.

Guess what tmrw is?? Season premiere of Giada's #HolidayHandbook on @Foodnetwork @ 12pm w/ lots of spooky snacks! Tons of ppl wrote in asking for shopping info last season so created a page with all the info this time around… link is in my bio. Enjoy!! ???? by @SamSaboura

Giada De Laurentiis' daughter acquired her name from her mother as ‘Giada’ is Italian for ‘Jade’. During an interview, Laurentiis revealed that she doesn’t plan on having any more children. 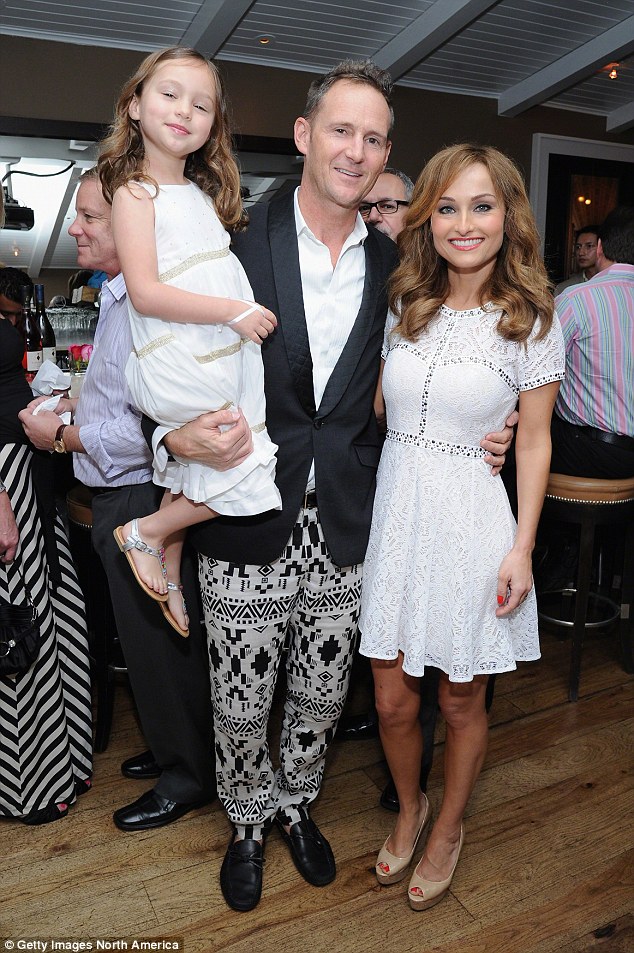 They together really make an adorable family.

In an article published by E! News on November 6, 2015, the "Food Network Star" denied the rumors,

We do get together on Food Network Star,

Well, we're very good friends. We've worked for many years together, but I don't think that's ever going to happen because I'm smarter than that.

These days Bobby Flay is seen really close to various ladies. In February 2016, Flay was spotted in a romantic secret date with host Chelsea Handler. Similarly, in March 2016, he was seen wrapped up in the arms of ‘Masters of Sex’ actress, Helena Yorke, in New York. This indicates that Laurentiis and Flay’s rumors of marrying each other were baseless and she is just one of the many girls for Bobby Flay, who has a hefty net worth.

Talking about Giada De Laurentiis’ relationships,  apart from Bobby Flay she was romantically linked with Matt Lauer and John Mayer.

Giada De Laurentiis started dating boyfriend Shane Farley in late 2015. She even seems to be very happy with him. During an interview, she admitted that her life is fun with her daughter and someone new. Even though she didn’t reveal the name but, sources tell us that Laurentiis and Farley have been linked since November, and rumors have been going around, that they might be marrying each other.

However, they have been dating a few months before that and the pair were seen celebrating the New Year in Mexico. By now, many of her fans wonder whether the couple is still in a relationship or not? Several sources, whosdatedwho, claims that the couple had already broken up. However, while going through Giada De's Instagram account, we found a post back from 2nd October 2017, in which Giada De Laurentiis and Shane can be seen together.

While some sources claim their break up, Giada De Laurentiis can be seen sharing their pictures on her social sites. So, nothing can be said as of now. Hope the pair opens up about their relationship with their fans.

What do you guys think about Giada De Laurentiis’ relationships? Please, leave a comment below.

Also Be in touch with Frostsnow.com for updates.