Gary Dell'Abate cheat his wife Mary Caracciolo according to Stern. Are they divorcing? The radio producer Gary Dell’Abate is a renowned media personality. He is the producer of The Howard Stern Show since 1984. Gary is married to his wife Mary Caracciolo. The pair has two children together.

During a radio segment, Howard Stern revealed that Gary cheated on his wife. Despite the accusations, Gary’s relationship with his wife is still healthy. There is no hint of divorce between the pair. Stay with us to know more about them.

Gary and his lovely wife Mary tied the knot in 1992. Yes, it has already been so many years of Gary’s togetherness with his spouse Mary. Even though a lot of controversies surfaced in their lives, they stuck together through all the thick and thins. It seems like Gary’s wife is a very understanding and a supportive woman. Gary shares a very strong bond with his wife. 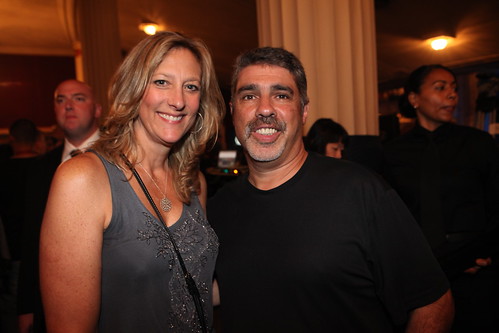 Gary and Mary are a proud parent of two sons. Their elder son’s name is Lucas and the younger son is Jackson. Their relationship with their sons is also amazing.

Image: Gary Dell'Abate and Mary Caracciolo with their sons, Jackson and Lucas

Gary’s amazing family photo is often seen on the internet. They look really happy and the connection between the whole family is often seen in their smiles. In May 2016, Gary was seen celebrating his younger son, Jackson Dell’Abate’s graduation. Jackson is a Syracuse University graduate in Public Communications.

Jackson is currently an executive assistant at the Netflix while he has also worked as an assistant and summer intern for the United Talent Agency. And, let's not forget, he was a production assistant for Jimmy Kimmel in his show Jimmy Kimmel Live for three months.

Also, see: How much is Jimmy Kimmel's net worth? His career and awards

While for their elder son, he is currently a DJ and a producer for his own company Lucas Dell'Abate, an electronic music art company based out of Connecticut.

Did Gary Dell'Abate really cheat on his wife?

A few years ago, Stern revealed in a radio segment that Gary cheats on his wife. However, in the end, Stern revealed that he was just pissing off Gary. On the other hand, Gary sounded like he was really mad about Stern’s false accusations. Stern was even heard apologizing about it.

The fact that Gary is still living happily with his wife proves that Stern’s accusation was not true. Thus, we can say that Gary and Mary never had a serious fight and we hope they never will.

Gary and Mary have completed their 24 years of married life. Even though many years have passed, they seem like they had just met. The pair shares a great chemistry and that’s an ultimate reason behind their successful married life. Being married to the same person for 24 years is not everyone’s cup of tea. However, Gary has proved that he is a great husband and an amazing father.

What do you guys think about Gary Dell’Abate and Mary Caracciolo’s relationship? Please, leave your opinions in the comment box below.