Gabriella Papadakis and Guillaume Cizeron are world champion ice dancers. Looking at their amazing chemistry anyone can guess that the pair is dating, however, the truth is different. Papadakis and Cizeron aren’t dating and in reality, they are more like siblings.

Yes, you read it right. To the ice-dancing lovers, this pair is totally a couple goal but in actual Papadakis is dating another ice dancer/choreographer Stef Caruso.

She has also won a silver medal at the 2012 Junior Grand Prix Final and 2013 World Junior Championship. However, Papadakis didn’t do it alone. Her partner Cizeron was with her all the time. She might not be able to win such prestigious honors and awards without Cizeron.

Gabriella Papadakis and Guillaume Cizeron complement each other

Papadakis and Ciz's harmony during their ice movement can make anyone suspect that they are in love for real. However, they aren’t. During an interview, Papadakis revealed that knowing Cizeson for too long makes her feel like he is her brother. She further added that it would be a crime if the pair falls in love for real. 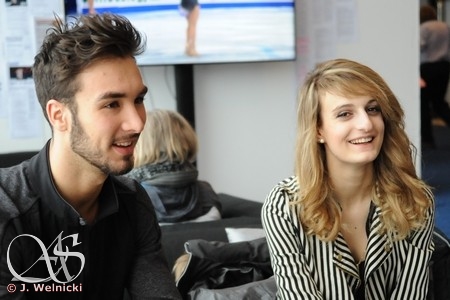 It seems like the pair doesn’t see each other quite often outside their profession. Papadakis said that their act of being in love on the ice is enough and they need to have some barrier and certain distance outside their work.

Despite the fact that Papadakis is seen with many men on her Instagram profile, she is currently dating Stef Caruso. Time and again she posts amazing photos of herself with her boyfriend. The pair looks adorable together and they appear to be really happy in their relationship. There are no any hints of break up between the pair.

What do you guys think about Papadakis and her affair? Please, leave a comment below.