The Panamanian-born American political talker, host, and author Juan Williams is currently working for Fox News Channel. 64-year-old Juan is known as the co-host of The Five alongside Jesse Watters, Greg Gutfeld, and Dana Perino. Professional since the early 1980s, Williams alongside his successful career, is also enjoying a happy married life.

Juan Williams born as Juan Antonio Willimas is living with his wife Susan Delise. The couple is married for over 40 years and still enjoying their married life without any mishaps in their relationship. The couple is the proud parents of their 3 children, who are now grown-ups. Eager to know more about their children, relationship and affairs? Get ready.

Juan Williams and Susan Delise have become the role model for many couples. The couple got married in July 1978, though, none of them has opened the details on their relationship beginning. The couple is reported to have dated for years before turning themselves into husband and wife.

Completing 40 years of marital togetherness, Williams has had a very amazing family and hasn’t ever been linked to any external affairs or girlfriend. So, of course, there have been no rumors of divorce. Even though some rumors of Juan being a gay rose up, the issues were proved to be a hoax after his delightful marriage to Delise.

The couple even shares 3 children together, who are now grown-ups and are successful in their professional career. Juan Willimas and Delise are now also the grandparents of 2 grandchildren.

Juan and Delise are the proud parents of their 2 sons: Antonio (aka Tony) and Raphael (Raffi) and a daughter named Regan (Rae). Though, the birth details of their children are still unknown.

As reported, the eldest son, Tony, worked as a Senate page and intern for GOP Senator Strom Thurmond from 1996 to 1997. Also, he was a legislative correspondent (2004-2006) for Republican Senator Norm Coleman.

Well, the younger son, Raffi, was an anthropology student. He also played lacrosse at Haverford College, his father's alma mater in Pennsylvania. Currently, Raffi is a deputy press secretary for the Republican National Committee.

As reported, Juan's daughter Rae Williams is married to Patrick Herald. In 2009, as per Willimas interview with NPR, Regan and Patrick were expecting their first child, but the further details never became highlights.

Currently, Juan Williams and Delise are the grandparents of Pepper and Wesley. 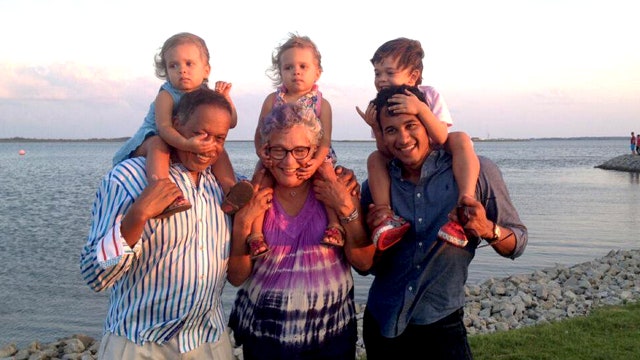 Juan and Delise with their second son Raffi and their grandchildren

Some Controversial Facts about Juan Williams

Juan Willimas formerly an NPR (National Public Radio) employee was fired from the company in October 2010 after he made some negative remarks about Muslims on The O’Reilly Factor with Bill O’Reilly.

I mean, look, Bill, I’m not a bigot. You know the kind of books I’ve written about the civil rights movement in this country. But when I get on the plane, I got to tell you, if I see people who are in Muslim garb and I think, you know, they are identifying themselves first and foremost as Muslims, I get worried. I get nervous.

Soon after being fired, Juan Williams joined the Fox News where he made his impressive appearance on FOX News Sunday with Chris Wallace.

Well after a year of the incident, in 2011, Juan's wife Delise marked out NPR as  "hypocrites." The NPR people were hypocrites because they are supposed to be the liberals who are accepting of all kinds of people and inclusive, and they were the most exclusive group in my experience of going to events related to work that I have ever seen.

The story of contorversy didn't end here. On September 3, 2018, Juan Williams made a Tweet about America's President Donald Trump captioned "Trump's 'majority' is fake" which became a viral issue.

Let's see what more the future has to offer.