Nothing can be beautiful than getting married to the person whom you love, right? The gorgeous Fox News journalist Kristin Fisher is one of those lucky women who succeeded in marrying the love of her life, Walker Forehand.

The pair officially became husband and wife in 2011, after years of being together.

Curious about their love story?

Let's learn more about them on Frostsnow. Just stay with us. Their wedding ceremony was conducted in front of their close friends and family members at the Church of the Holy City in Washington. Walker Forehand and Kristin Fisher after their marriage ceremony

The bride and groom enjoyed their wedding reception on the top floor of the Hay-Adams Hotel. With regards to her marriage, Walker told The Washington Post:

I really feel like I’m the luckiest guy in the world, and I don’t say that lightly. It’s better to overachieve in life than underachieve and I truly feel like I’m overachieving, which is a good thing — that’s the way that you want to feel when you’re getting married to someone.

Love Affair And Dating Life of Kristin and Walker

The 34-year-old Fox News anchor reportedly first met Walker during the summer of 2003  at a six-week-long abroad-study program. 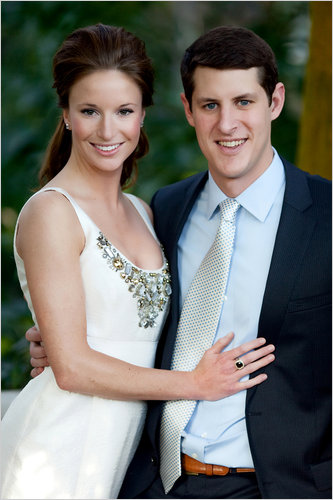 After six years of separation, the pair crossed paths again in 2009. Soon, a day before Kristin's 27th birthday, Walker took the journalist to the U.S. Botanical Garden on a fake news assignment and finally popped the question.

The newly married bride and groom

After two years of the engagement, the adorable couple walked down the aisles in 2011 and ever since then, despite their busy schedules, the couple is enjoying a happy marital relationship.

But given their crushing schedule, the lovebirds do not seem to be worrying about starting a family. Instead, they are happy expresses their love for each other and posting pictures on social media sites.

Happy Birthday to the man who makes getting older feel so fulfilling and fun. I love growing up with you @walkerforehand ?? (On the left, the saint of a woman who made him. In the middle, my adorable niece who stole the show at @sangerholzer's wedding this weekend in Alabama)

We wish them all the best for their future and we hope we will soon get to know about their cute little ones.