Best known for her appearance on Emmy-winning reality TV show Shark Tank, Lori Greiner is an American entrepreneur, inventor, and TV personality. She founded For Your Ease Only, Inc. which is a company based in Chicago. She is also the president of the company, which was established in 1996 and is mainly involved in developing and marketing products. The inventor of more than 600 products, at the moment, has a big hand in helping aspiring entrepreneurs to launch their ideas and products.

Born on 9th December 1969, the 48-year-old also hosted a TV program called Clever & Unique Creations by Lori Greiner. Taking a closer look at her personal life, she is currently married to Dan Greiner, the Vice President and Chief Financial Officer of her company, For Your Ease Only, Inc.

Lori does not have any children at the moment as she is aiming to become one of the biggest entrepreneurs. She is trying to focus more on her career. So, here we are going to share with you some information regarding her career and achievements. Also, find out more about her net worth and earnings.

During the initial days of Lori's career, she had never planned to become a serial inventor. However, she was very creative and designed jewelry and sold them. Later on, she invented earring organizer made out of plastic. The organizers featured sliding rods which allowed the user to store 100 pairs of jewelry neatly. She patented the product prototype after borrowing some money. The prototype was picked by J. C. Penney before the holiday season. The product was a massive hit, and she was able to pay her loan of $300 thousand in just eighteen months.

She also gained massive success on Home Shopping Network which helped her to transition to a more prominent network QVC. In the year 2000, she created a steady flow of products which enabled her to land as a host in her very own show Clever & Unique Creations which aired on QVC.

It was not until 2012 that she joined ventures with TV series Shark Tank. She is one of the investors on the show along with Kevin O' Leary, Barbara Corcoran, and others.

One of her biggest on the show was back in 2014. She invested in a company producing texture changing household sponge Scrub  Daddy. She was able to sell 2 million sponges on QVC in just a day on 30th July 2014. Back in 2016, the product also became the biggest success story in Shark Tank history with a sales record of more than $100 million.

Some of her other significant investments are in Simply Fit board which is an exercising tool and Sleep Styler, comfortable hair rollers. These two along with Scrub Daddy were cited as the biggest Shark Tank hits of the date back on 15th September 2017.

Special price on the eBook version of my book Invent It, Sell It, Bank It! Only $1.99 for a limited time! I truly wrote this book as a pay it forward & to really help people who have an idea & want to bring it to market. #payitforward #entrepreneur

Apart from Shark Tank, the TV personality holds 120 patents in the United States and other foreign countries. Moreover, in 2014, she also released her book Invent It, Sell It, Bank It!: Make Your Million-Dollar Idea Into a Reality.

Taking a look at her achievements, she has not won any notable award as an individual award. But her show Shark Tank has won 3 Emmy Awards to date. Moreover, on 13th September 2017, she appeared on the stage of Emmy Award Event alongside Derek Hough as a presenter.

How much is Lori Greiner's Net Worth?

Famously recognized as 'The Queen of QVC,' Lori is a very well-known personality. The creator of more than 300 products has an estimated net worth of $50 million as of 2018. Back in 2015, her net worth was $15 million, and the increase in her net worth in just a few years is massive.

Her major source of income is her career as an inventor and entrepreneur. Her first product, the plastic earning organizers earned her a profit of $500 million. And also let's not forget that she was able to sell 2 million of Scrub Daddy on QVC in a day, the product which she has invested in Shark Tank. The product alone has sales of over $100 million.

Apart from these, her appearances on different shows also pay her some big bucks. Moreover, she can also be seen promoting products openly on her Instagram page. Not long ago, she uploaded a picture on Instagram showing different earnings she sported on Shark Tank. She promoted the company and added a link to their site.

She is a modern business-minded woman and knows how to attract people, and her most seen strategy is giveaways. Every now and then, she does giveaways of products.

Taking a closer look at her lifestyle, she certainly lives lavishly. According to sources, she owns a mansion in Chicago which is worth millions. Moreover, she drives a 2010 Mercedes SLS in a gorgeous red color. She has been spotted driving the car numerous times. The starting price of the car is $200 thousand, but considering the lavish self she is, she indeed modified the car increasing the cost even more. 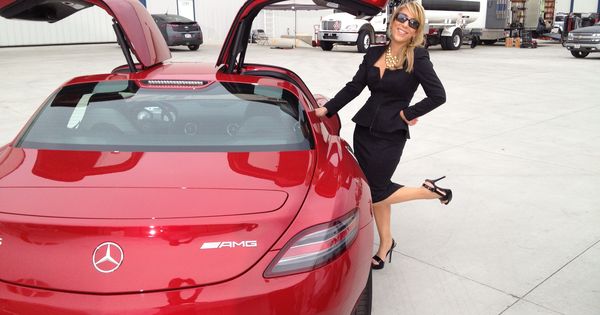 Through her Instagram, it can also be found that she is a person who loves to splurge as she often posts spending her time at some super expensive locations.

However, despite all the expenditures she makes for herself, she also has a big heart. She is known to often donate to charity like CASA for Children, Kind Campaign, and many others.