The secret to a happy married life is lots of love and mutual understanding, as proved by the loving couple Clayton and Ellen. Clayton Kershaw, the famous American professional baseball pitcher for the Los Angeles Dodgers in MLB, has been living a blissful married life with his wife Ellen Kershaw, nee Melson.

The long-time lovers have grabbed everyone's attention making people curious about their married life.The duo also shares the parenthood of their two children.

Clayton and Ellen knew each other early in their lives. Reportedly, they met in their high school, Highland Park, and after some dates and romantic moments became lovers, before moving to different states after graduation.

Clayton was drafted by Dodgers and Ellen went to Texas for further studies. But despite living miles away from each other their love was strong enough to hold their hearts together. In 2009, Clayton proposed Ellen for marriage

Clayton and Ellen during high school

They both got hitched after 8 years of relationship and got hitched on December 4, 2010, in a Dodger-themed wedding ceremony in Dallas.

Clayton with his wife, Ellen Kershaw

It has been more than 7 years since their marriage, but the love that started from high school only seems to be growing with time. 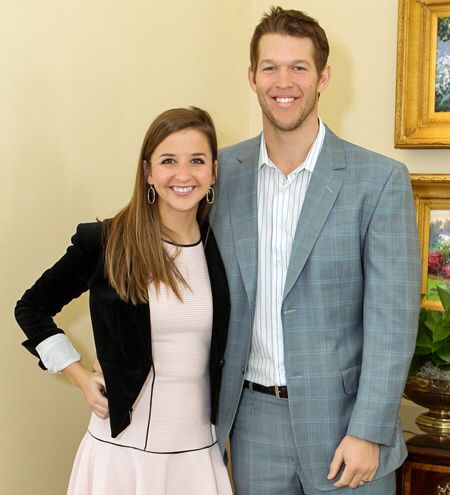 Clayton and his wife Ellen

Clayton and Ellen are free from controversies so far.

A big applause to the couple!!

The old-time lovers have become parents to two children after their marriage. The couple welcomed their first baby-girl, Cali Ann, on January 23, 2015. The day before the birth of Cali, Clayton received his third CY Young Award.

Clayton holding his baby, Cali, in his hands

But, more happiness was on its way. The couple became parents to two children after welcoming their second baby, Charley, on 19 November 2016.

Welcome to the world, Charley!

The family of four seems happy together. Even though Clayton is busy with his games, the family manages time to see each other.

Our kids don't realize they're watching their dad live out his dream... thanks @JonSooHooPics for helping us capture the memories for them. pic.twitter.com/rhw323vXkJ

Also read:  Married life of Carrie Henn with Nathan Kutcher and their children

Blessed with happiness and prosperity, the couple is actively involved in helping underprivileged children. The couple, who has also co-authored the book Arise: Live Out Your Faith Dreams on Whatever Field You Find Yourself, found their charity in 2011 under the name Kershaw's Challenge.

Clayton and Ellen in Africa for charity work

As per sources, the organization started with a girl named Hope. Clayton met Hope, who suffers from HIV, when she was 9-years-old in Zambia. She made him realize the importance of giving.