Chloe Lukasiak & Ricky Garcia Break Up, Who is she Dating Currently? Know her Affairs The break-up news of the former TV series Dance Moms star Chloe Lukasiak and her boyfriend Rick Gracia came as a shock for all of their fans. The 16-year old American actress/dancer started dating her now ex-boyfriend Rick in 2015, but unfortunately, they went separate ways after a year of their relationship.

The news on the couple's separation was confirmed by J-14. And the news came right after her fans noticed that the Dance Moms star rarely posted pictures of the couple on her Instagram account. So, why did the couple broke up? Wasn't it a real deal in between the couple?

Who is Chloe dating currently after her recent break-up?  Is she currently in a relationship or not?

Let's find about the love life of Chloe in details here in Frostsnow.

The Former Couple: Chloe Lukasiak and her ex-boyfriend Rick Gracia

Chloe and Rick started dating each other in 2015, but within a year, the couple called their relationship a quit! The former couple is still a good friend even after the breakup. 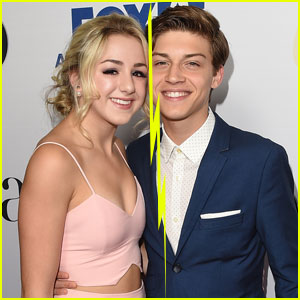 The representatives of Chloe and Rick revealed that the couple broke up due to their hectic work schedules. And even the former couple came openly with the news of their break up and insisted that there wasn't a third person in their relationship.

The representatives of the couple stated that,

They remain close friends and support one another and want the fans to continue to support them individually, as well. There are no hard feelings, there wasn’t any disloyalty, and they ask for the fans to respect their mutual decision and privacy.

Contrast to the couple's statement many of her fans blamed Ricky for the separation of the couple. As per the fans of the actress, Ricky cheated on her with Italian TV actress/model Beatrice Vendramin.

Well, that shouldn't be the case because after checking out the Italian model's Instagram account, we found out that Beatrice is currently enjoying a romantic relationship with some other guy.

Check out one of the pictures of the model with her partner.

As per Chloe and Ricky's statement, the busy schedule must be the reason for their break up.

Also, check out a video on the reason behind the couple's breakup.

After the breakup, most of Chloe's fans are in search of her recent relationship status. So, is she dating someone new?

Chloe's Current Relationship Status? Is She Single or Dating?

After the breakup, Chloe doesn't seem to be in a hurry to be in a relationship. She hasn't been linked to any other name after her separation from Ricky. And the actress/dancer seem to be focused on her career instead of addressing a relationship recently.

The news on the singlehood of Chloe might be a heart melting news for most of her male fans. One would be lucky to have the actress/dancer as his girlfriend.

Let's see what's next for Chloe.

We will keep you updated here in Frostsnow.