Frostsnow https://frostsnow.com/
Home Gossip Cara Delevingne Shows off Her Baby Bump, Is She Pregnant? Detail about her Married Life, Affairs

Cara Delevingne Shows off Her Baby Bump, Is She Pregnant? Detail about her Married Life, Affairs Since pregnancy news has been appearing one after another, nobody doubted Cara Delevingne when she was snapped showing off her baby bump. In fact, her fans went super crazy over the image. However, we suggest them not to freak out so soon, although the supermodel seems to be pregnant.

Cara's pregnant belly is faux and she appeared in that form just to model for 'In Pig', a line of maternity wear owned by one of her cousins. Let's find out about in details and Cara's married life and relationship:

We can't admit the fact that Cara looked super adorable with the fake bump as she cradled and joked around it. She even made faces while pointing at her faux belly while carrying Cecil, her pet rabbit, in her pocket. 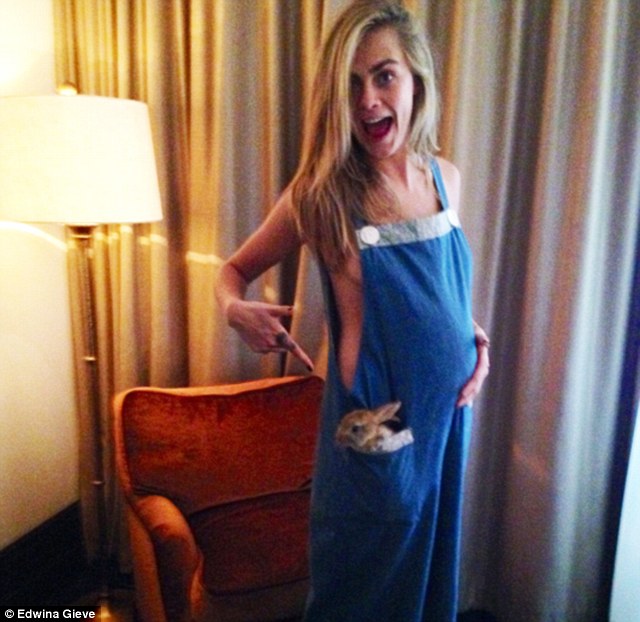 She wore a pair of blue overalls that had huge buttons on it. She appeared to be naked under her outfit and had no makeup on her face. She let her blonde hair free and loose.

Cara Delevingne's only child is her rabbit Cecil

To clear her fan's curiosity, Cara even confirmed that her belly was fake and she is not expecting at all to the Telegraph. She also revealed that the only baby she has is Cecil, her pet rabbit.

Cara's cousin, Edwina Gieve, seemed more than delighted to have Cara endorse her maternity wear. She revealed that the model looked fantastic in their dungarees as it is the brand's bestseller. Gieve also added:

‘Cecil, the rabbit may be her only baby, but Cara proves our clothes can be worn with or without a bump.’

Cara was in an open relationship with her actress girlfriend Michelle Rodriguez, but their breakup rumors have been flying around lately. This makes us believe that Cara isn't really interested in family-making at the moment.

Also read if Cara Delevingne has a boyfriend. Find out about her dating life and affair.

Apart from Michaelle, Cara has dated Jake Bugg and St. Vincent. She is also said to have had an affair with Jack O'Connell, Gaz Beadle, Harry Styles, Jay Electronica and Rita Ora. But now, it seems like Cara is all single, which is quite a good chance for all the men and women who have a crush on the 24-year-old beauty. We hope Cara Delevingne finds the right person for her really soon, we can't wait to see her tie the knot with the love of her life.