Cameran Eubanks Living Happily with her Husband Jason Wimberly; Planning to have Children Ever got a chance to become a parent? We believe that is one moment you will cherish for a lifetime. Being a parent is the best feeling that you will ever come across. We bet you agree with us.

So, today we are going to talk about a similar celebrity married couple, Cameran Eubanks and Jason Wimberly who are soon going to be parents for the first time. Recently, the beautiful actress, Cameran Eubanks surprisingly announced her pregnancy with a copy of sonogram through Instagram.

Are you among the people who are interested to know about the couple's personal life. Let's begin.

Eubanks announced her pregnancy; Baby girl on the way

Southern Charm star Cameran Eubanks revealed that she is pregnant with her beloved husband Jason Wimberly, a physician. She announced this news with an Instagram post in which she is holding a copy of her sonogram. Check it out.

Times a changin' y'all! Baby ??GIRL?? Wimberly will be touching down this fall! Excited (and nervous) for this next chapter in life! ??

You know what the sonogram says? It's a baby girl. Yayyy! Imagine how she will look; cute like her mother? We just can't wait for this angel to take her first step in this world.

Cameran once didn't want to have a baby, and on that very matter, she even went to a therapist and discussed her fear of having a child. Here's the statement she gave,

That’s obviously something you think of once you get married. He’s more ready than I am. Before we got engaged, I sat down with him and said, ‘I have no desire to have a child right now, there might be a big possibility I might never want to have a child. I just want to make sure you’re not going to leave me if I don’t give you a kid.

However, looks like she has now let go her fears as Cameran is now a pregnant woman. She is soon going to give birth to their first child.

Now, let's talk a little bit about this fantastic couple's married life. The couple shocked their fans across the globe when they tied the knot back on 12 April 2014. After that, she revealed that Jason was her boyfriend whom she had been dating for so long.

Their wedding ceremony was held in the outdoors beneath a huge oak tree in front of their closest friends and family. Here's a picture of their marriage. Check it out. 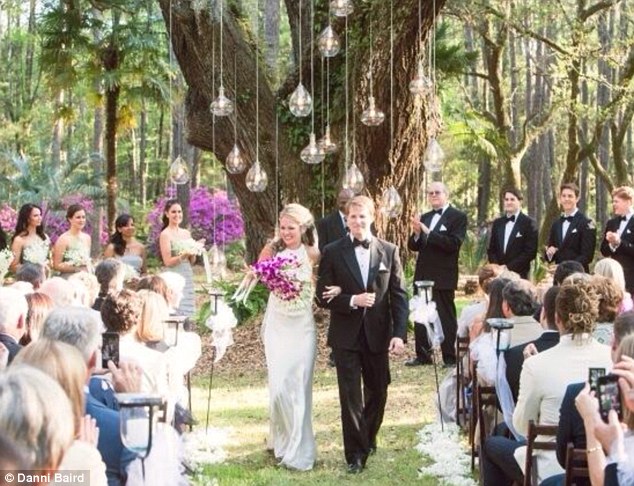 Husband and wife couple; Jason Wimberly and Cameran Eubanks at their wedding ceremony

It has been nearly three years of their marriage, and we don't see any divorce rumors, extramarital affair, not even a controversy in their relationship. Wow! How amazing is it?

However, once, Cameran did make a joke about getting a divorce with her husband. Check it out.

Good thing if I end up divorced we won't have to worry about the bank accounts. ?????? https://t.co/BbJc5IPXle

Almost every person in the world wants their marital relationship just like these two love birds. What do you think?

Want to know about her career, net worth and salary of the gorgeous lady Cameran. Here's a video.

The couple is leading a happy married life maintaining both their personal and professional life. We, wish the couple all the very best for their future and we hope they achieve whatever they want in their life. For more updates, keep in touch with us.