Bruce Mann Jr., a Professor of Law at Harvard Law School and a legal historian, has made his successful career and his happy relationship with his wife, 68-year-old Elizabeth Warren, a veteran politician from the Democratic party, which also has America's power couple Bill and Hillary Clinton,   who has served as a senior United States Senator from Massachusetts since 2013.

Elizabeth, who got married twice in her life, shares 2 children and 3 grandchildren. Mann and Warren seem to be in a good relationship so far. So, let's know the details about the relationship of Warren and Mann along with their children on Frostsnow.

Burce and Elizabeth first met during their years at Harvard. Back then, Elizabeth was a divorcee and already a mother while Bruce Mann Jr. was still single. The couple finally got married in 1980. However, the details of their marriage is a secret till now. Maybe, they got married in a private ceremony and did not make much of it, given Elizabeth's status. 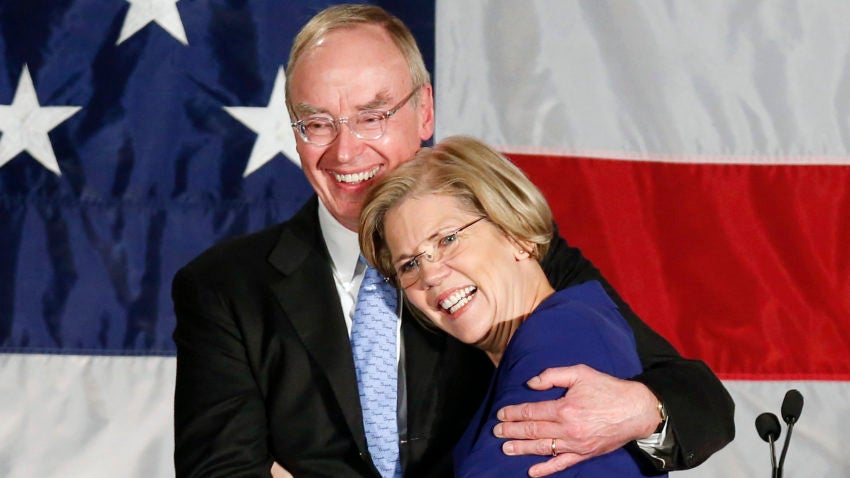 We hear many celebrity couples separating after years of marriage. But both Bruce and Elizabeth have managed to stay together so far. Back in July this year, the couple celebrated their 37th anniversary. Elizabeth even shared their lovely moments together on her Instagram.

Have a look below.

My sweetie Bruce and I are in DC this week. Last night when I got home, Bruce met me with a sweeping “ta-da!” and flung open the door to the hall closet. New shelf. Hooks. A place for grocery bags. “Happy Early Anniversary!” Ok, that may not seem very romantic, but I LOVE organized closets. (Yes, I hang all my jackets together, arranged by color.) But I have zero time to hang a shelf and even less time to get out the drill and put up some hooks. The new shelf and hooks (and Bruce’s enthusiasm for them) made me laugh – and reminded me just how sweet and thoughtful Bruce always is. Back when I proposed to Bruce, I knew he was pretty special. But through decades of ups and downs – kids, dogs, moves, living in separate cities, deaths in the family, and on and on – he’s turned out to be even more special than I originally thought. He even hangs a shelf on occasions like this. I’m a very lucky woman. Happy anniversary, Sweetie. I love you.

Bruce seems to be a supportive husband and, despite having one of the most powerful US politicians as his wife, he still enjoys staying low key, focused on his job rather than the fame that has come along with Elizabeth's rising career. However, he was quite active during Warren’s election campaign.

So you might be wondering how their relationship began? Stay tuned.

In most of the cases, its boys who propose to the girls. But with Bruce and Elizabeth, it was just the opposite. It was  Elizabeth who proposed to Bruce. On their 36th wedding anniversary, Elizabeth shared some sweet memories about the beginning of their affair. She said that she proposed to Burce in his classroom. She remembered,

When class was over and the students had cleared out, he came up to me and asked, somewhat hesitantly, “Uh, what did you think?”

Well, after an "Ok" from Burce, they started having an affair. The rest, as they say, is history. Elizabeth has even gone ahead and posted a video about the relationship with her husband on her Facebook.

She even added that although she was married before, he didn't hesitate to accept her proposal and slowly their relationship took a turn for marriage.

A simple and perfect love story!

Elizabeth Warren's past relationships and children

Well, even after being married to the person of their dreams, both Bruce and Warren do not have any children together. Yes, you guessed it right. The two children we mentioned above are from Elizabeth's previous marriage.

Warren, who was appointed by Senate Majority Leader Harry Reid in 2008, was first married to her high school crush Jim Warren in 1968. But sadly, after 10 years of married life, the couple got divorced in 1978. After the separation, Elizabeth took the custody of her son Alexander and her daughter Amelia Warren Tyagi. Amelia is the co-founder of Business Talent Group and chairman of the board of Demos. She is married to her husband Sushil Taygi and is a mother of 3  children, Octavia Tyagi, Atticus Mann Tyagi and Lavinia Tyagi.

Elizabeth's son Alex is also married and is living with his wife, Elise, but they do not have any children yet. Elizabeth, on her Facebook page, also shared about the relationship she has with her children and grandchildren.

Warren sharing some lovely moments with her grandchildren on her Instagram. Have a look at the pictures.

I take joy in being a grandmother – deep down, goosebump joy at the laughter, the hugs, the bedtime kisses, and the sustaining hope for what comes next. With so many terrible and scary things happening right now, my grandkids’ smiles remind me why I get up and fight every morning. It’s to build a future, not just for them – but for all of our kids. #GrandparentsDay

I love Halloween – dressing up, trick-or-treating, handing candy out at the door. (Confession: I have a real weakness for Mounds.) When my kids Amelia and Alex were little, long before the online shopping days, I’d spend days painting the perfect butterfly wings and hours stitching the perfect Spider-Man mask. I loved every minute of it. But nothing beats being a grandma. I’m no longer on costume duty – at least, not for the kids. Every year that I get to see my grandchildren on Halloween, they give me a new assignment for their supporting cast. One year, my granddaughter Bennie talked me into becoming “the Sparkle Queen” – complete with a pink glitter wig – all so that I would complement her “Sparkle Princess” costume. Last year, the girls both dressed as black cats so I was a wicked witch. (Sorry, Republican attack ad makers – all photos have been deleted.) One of the trickiest costumes was when Bennie decided she was going to be Little Bo Peep and I would be her Lost Sheep. The Bo Peep costume was a snap to find, but the Lost Sheep was a little trickier – especially in fully-grown, adult size. I finally found a puff-fuzzy white pullover, and I could do gloves for my front paws (or whatever they are called on sheep). I cut the pockets out of the pullover to make sheep’s ears. It was just what Bo Peep needed. She had a wonderful time parading around and commanding her sheep to do various tricks. I’m down in Washington this Halloween, where some truly scary things have been happening this year. Just when we think one nightmare is over, the Republicans seem to bring another terrible policy back from the dead. But it’s days like Halloween – where we dress up in silly costumes, eat too much candy, and make happy memories with the people we love – that remind us why we’re in this fight: so we can build the kind of future where our kids and grandkids can flourish. I hope you’re making happy Halloween memories today! #halloween

Surely, there is always a second chance in life, and it proved great for Senator Warren. despite failing once in marriage, she found love that has lasted a lifetime now. We wish the couple all the best for their future.