The sex goddess of the late 50s and 60s, Brigitte Bardot, dazzled the film industry by transforming as film industry's sex goddess from a sex-bomb of the modeling industry. Her fans knew very well that her dramatic movies kind of matched with the dramas she was going through her life. Even though she had epic fame, it pushed her towards depression.

Bardot is renowned for having 100 boyfriends and multiple husbands too. Even though she found success in her life, her marriages were totally unsuccessful. It's pretty sad that a gorgeous woman like her had to go through so much pain in her life. Let's get the details about her dating history, relationships, and marriages:

The sex goddess' first husband was Roger Vadim. They tied the knot on 21st December 1952 when she was just 18 years old. Their marriage couldn't go beyond 5 years as it ended in a divorce in 1957. Bardot's affair with other men was revealed as the reason behind their separation. She had an affair with co-star Jean-Louis Trintignant while she was still married to her foremost husband. They stayed together for two years until Bardot began dating musician Gilbert Bécaud.

Brigitte Bardot other marriages and children 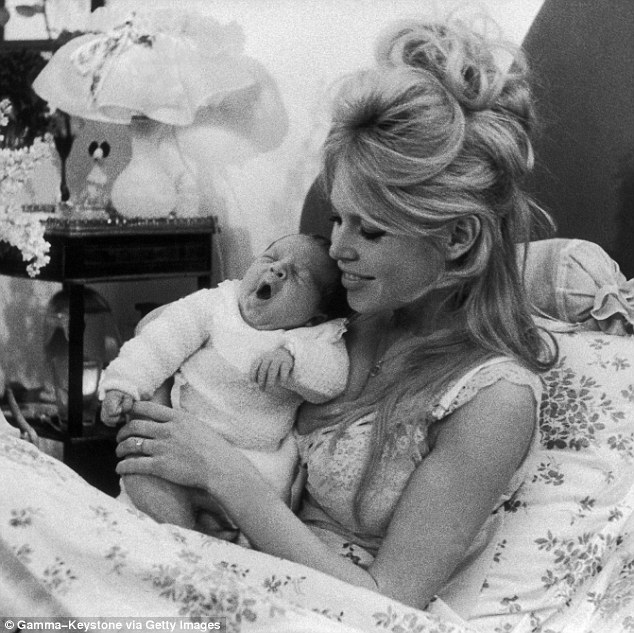 Brigitte Bardot after she gave birth to her son Nicolas

Sadly, their marriage couldn’t last either. They divorced in 1962 and Charrier got the sole custody of their son.
Millionaire playboy from German, Gunter Sachs became Bardot's third husband. They married on 14th July 1966. Just like her previous marriages, Bardot's marriage with Sachs went in vain as well as a result they split on 1st October 1969.

After ending her third marriage, Bardot got herself involved in a romantic love affair with Patrick Gilles. Their relationship lasted only until the spring of 1971.

If you are thinking that this is it for Bardot then you are pretty wrong as the series of Bardot's boyfriend is surprisingly too long. She dated bartender Christian Kalt, club owner Luigi Rizzi, musician Bob Zagury, singer Serge Gainsbourg as well as writer John Gilmore.

Watch the documentary of Brigitte Bardot, her parents, and her marriages:

Moreover, she was also in a relationship with actor Warren Beatty, Laurent Vergez and, sculptor Miroslav Brozek, and producer Allain Bougrain duBourg. There are numerous other unknown affairs of Bardot.

1992 saw Bardot's fourth marriage with husband Bernard d'Ormale on 16th August. Even though there are rumors which claim that the couple has already parted ways and Bardot is single, there is no strong evidence of it. Brigitte Bardot then and now

Thus, the 50s-60s sex symbol had a dramatic life with multiple affairs as well as husbands. She could barely make herself faithful on any of her marital relationship which is quite sad. We hope the lady, who attempted multiple suicides, is content with her life right now.