Danielle Christine Fishel a.k.a. Danielle Fishel is an American actress, chef, television director, and author best known for her portrayal of Topanga Lawrence-Matthews in 1990 television series Boy Meets World alongside Ben Savage. Moreover, she also appeared on the spinoff of the show called Girl Meets World in 2014.

Fishel, who also serves as a host on the TV show The Dish on Style Network, was previously married to American teacher Tim Belusko. He rose to fame after he got married to the Disney actress. However, the pair got a divorce back on 17th March 2016. But who is Danielle Fishel dating after her divorce? Has she married again?

Here we are going to share with you some interesting details about Fishel's relationship with her ex-husband Tim Belusko, their divorce, and her past relationships and affairs.

Danielle Fishel met her to-be husband Tim Belusko after she went back to college at the age of 27 to complete her college degree at Santiago Canyon College. After they met, they soon started dating in May of 2009.

During an interview, Danielle shared that Tim's Mortal Kombat tattoo on his calf was what caught her attention even though she is not much of a tattoo person. 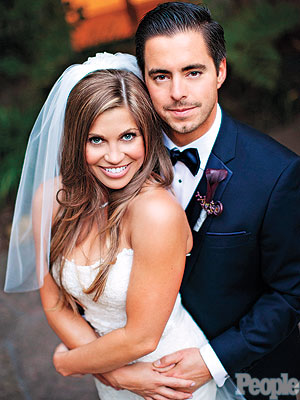 After being in a relationship for three years, they finally got engaged in May 2012. They got married a year later on 19th Oct 2013.

The pair tied the knot in Los Angeles and was attended by more than 200 guests.

A few days ago I was indistinguishable from Cousin Itt (swipe for a before shot) so I called my hair guru. She expertly cut and colored my hair and now I can see out of my eyeballs, I feel more confident, and when I touch a stranger I instantly envision how they're gonna die. If YOU want super human powers, follow @_hairbylaurie.

However, after two years of being in a marital relationship, the couple privately signed for divorce on 23rd October 2015. Their divorce news soon became the headline.

Their divorce was finalized on 17th March 2016, and till the date, the pair has not disclosed the exact reason behind their separation.

Danielle Fishel's Past Relationships and Affairs

Prior to getting indulged in a relationship, which later would turn out to become a marital relationship, Fishel dated American singer Lance Bass back in 1999.

They dated for almost a year and even went to prom together, but they decided to call it to quit in 2000.

SEE: Danielle Fishel Is Engaged to Jensen Karp After The Divorce With Tim Belusko: Affairs & Relationship

Soon after she broke up with her first official boyfriend, she started dating Canadian actor Devon Sawa. This relationship also lasted only for a year as they broke up in 2001.

Now, after a couple of relationship failures and divorce, Danielle Fishel has finally moved and luckily, she has also found her Mr. Perfect.

Just after dating for a couple of years, Danielle Fishell married the second husband, Jensen Karp on November 5, 2018. Danielle announced her wedding via social media accounts like Instagram and Twitter. She has posted numerous pictures from her second wedding ceremony.

That's Mrs. Karp to you.  pic.twitter.com/KlnJwobASx

The couple looks extremely happy together. We hope, her second marriage goes perfectly!

Who was Danielle Fishel married to?

When were Danielle Fishel and Tim Belusko married?

Danielle Fishel and Tim Belusko got married on 19th October 2013.

When did Danielle Fishel and Tim Belusko get divorced?

Danielle Fishel and Tim Belusko got divorced on 17th March 2016.

With whom was Danielle Fishel engaged to after Tim Belusko?