Everyone who has watched even a single episode of CBS’s Mike & Molly will agree that Mike was the sweetest and the most lovable cop of all time. And Billy Gardell played the role of Mike in the CBS sitcom, is even sweeter in his real life. After the show ended in 2016, Billy Gardell landed in a new comedy platform in Young Sheldon (2018).

Billy Gardell is married to his wife Patty Gardell for over 17 years and still is in a lovely relationship. The couple free from the rumors of divorce shares a son together. Curious to know more about Bill Gardell's relationship, married life, and children? Scroll down.

49-year-old Billy Gardell got married to his longtime girlfriend Patty Gardell in 2001. Billy has often said in interviews that his wife has been the biggest motivator for him through all his trying times.

My Name is Earl star credits most of his success and positive attitude to his lovely wife of 17 years. Their marriage is as steady as anyone could hope for. Their marital affair is often viewed as 'relationship goals' and many couples not only get inspired by them but also learn some helpful tips and tricks to avoid any chances of having a divorce in their lives.

In 2016, Billy shared a Tweet which read "My true award in life is being married to Patty!". Have a look.

My true award in life is being married to Patty! pic.twitter.com/X8aopSHYlf

The couple probably has overcome many issues in their lives sharing hard times together. What would someone expect more than this in a relationship?

The couple has a son together born in 2003. Their 15-year-old son, William Gardell, has currently not been seen on screen for acting, but it can be clearly seen that this Gardell Junior has inherited his father’s charms and comic timing.

Is Billy Gardell Expanding His Family?

No,  Patty Gardell is not expecting any day soon and the Gardell family is not planning any more children report says. But nevertheless, Gardell family expanded in early 2016 when they adopted a little pup as a part of their small family.

The family adopted a Cocker Spaniel mix puppy from a rescue shelter in Los Angeles in January 2016. 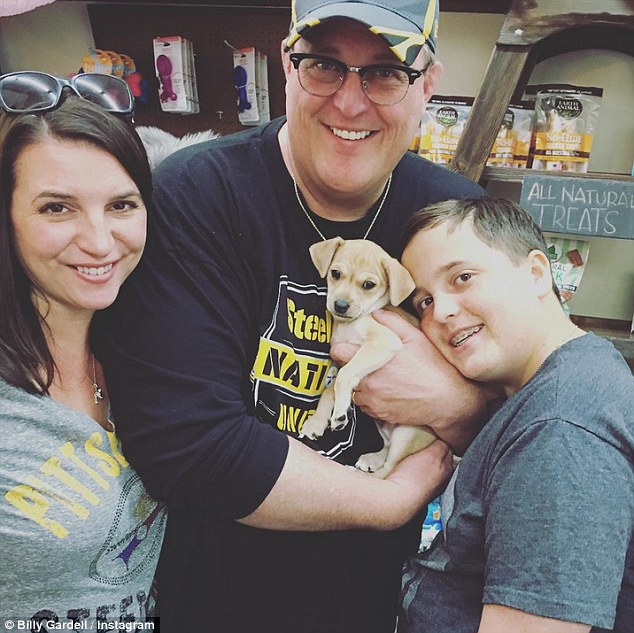 With the end of his highly rated sitcom Mike & Molly, Billy Gardell expects to be able to spend more time with his wife, son, and pup, whom they have named Buzz.

All three of them seemed ecstatic to have adopted a new family member.

What could be a better display of the family’s compatibility and affection than this huge step, right?

Fans all over swoon over this chubby actor, but Billy Gardell only has his eyes for his wife, and he is not even afraid to show his love for his wife online.

Happy Mother's Day to my wife Patty!! I love you and could not be more thankful??????

We wish the happy family lots of happiness for further.