Frostsnow https://frostsnow.com/
Home Gossip Bethany Joy Lenz pledges for support towards local theatre as she shares her picture in a play

Florida born Bethany Joy Lenz is best known for her role as Haley James Scott in a television series “One Tree Hill”. Lenz is interested in dancing, singing and acting since her childhood. Lenz moved to Texas with her family from where she started her acting career through various theater plays. At the age of seven, she played her first stage play as Munchkin in a local production of "The Wonderful Wizard of Oz". 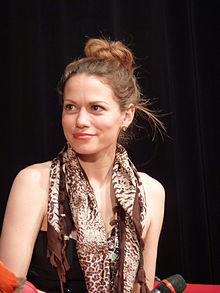 Lenz had been involved in theater plays for a long time, so she has a deep love towards it. And it has been the greatest one for her as she pledged support for local theaters through different Social Medias. Lenz has recently shared her childhood photo on Instagram with a caption “Support Local Theater”. The picture which she posted was from her first leading role as Scout in a play “To Kill a Mockingbird” at the Irving Community Theater, Texas when she was about 10 years old.

Support Local Theatre!! Reasons why in bio This is a pic from my first leading role in a play, as Scout in To Kill A Mockingbird at Irving Community Theatre. My childhood in Texas was rich in theatrical experiences, the building blocks for a career and paving the way for my future. None of which would have been possible without a community that loved & supported the Arts. Read more on @modernvintagelife #modernvintagelife

With the growing popularity of movies, theater plays are losing their values among people. So, to encourage people throughout the world, Lenz has been asking for support towards the local theaters. Lenz’s childhood was full of theatrical encounters. It had been the building blocks for her bright and successful career in acting. Additionally, theater plays had been an element to optimize her acting skills and without which she might not be able to kiss the success.

Bethany Joy Lenz has been prominent for singing too as she began singing when she was three. Lenz was married to her ex-husband Michael Galeota since 2005 after dating just for a month. They also had a daughter named Maria as their first child. But their relation could not go further as they got a divorce in 2012. Currently, Lenz is dating Wes Ramsey. She is estimated to have a net worth of staggering figure of $3.5 million.