Ana Cheri is the trending name in the social media. She is a model and is also known for her fitness tips. The 31-year-old American model is also the brand ambassador for the Shredz. The beautiful and sexy, Cheri came in the highlights after she posed for the Playboy Magazine and became the Playmate of the Month for October 2015.

Besides her professional life, Ana has also always in the spotlight because of her personal life. Cheri currently lives a happy married life with her husband Ben Moreland, a fitness expert. Unlike other celebrities, the couple likes to keep their love and relationship details undercover. The couple who has been leading a beautiful marital relationship for a long time reportedly began dating in 2006.

Ana Cheri Cherishing her Married life; Relationship with her husband

Many of us dream of getting married and settling down with our loved one. And seems like Ana Cheri got blessed with the fortune as she got to marry her dream boy Ben Moreland, the fitness professional who has also worked with UFC Ring Girls Arianny Celeste and Brittney Palmer. The couple got married in 2011 at the Miramonte Resort in Indian Wells, CA after 4 years of dating.

Have a look at their beautiful wedding moment.

The couple, however, has not given the details about the guest present in their marriage. Probably their close friends and relatives blessed them while they exchanged their vows.

And a happy news is that we do have a video of their special day. Let's take a look.

It's been 7 years of their marriage, but the love duos with their strong love are free from the mishaps of separation and divorce. Besides, Ben as a husband is doing his best to help her girlfriend-turned-wife Ana to achieve things she wants in her life.

Even after these years, Ben and Ana are deeply in love with each other. Have a look at Ben's love confession.

Ana, you are my sunrise. You are the reason I get up every morning. You shine light and warmth into my world giving me life. I look back over the incredible journey we have shared together over the last 10 years and I feel incredibly blessed. Happy Anniversary Ma Cheri, you are the most precious thing in the world to me and you shall always have all of my love.

The couple also shares some lovely moments together making themselves as an example of true love for the young generation.

Flash back Friday to a few years ago when Ana and I were in Hawaii shooting her calendar. Reddit got ahold of this photo and had some fun ????

Swinging in another new year with you! ?? 2017 was epic, we accomplished so much it’s crazy!! I can’t wait to see what 2018 brings. Wishing everyone a safe and fun New Year’s Eve!

Ana and Ben seem to be free from the records of the past affairs and rumored relationships. Also, there are no reports of them being indulged in an extramarital relationship. They also have not welcomed any children yet.

Seems like the couple is not in a hurry to become parents. Even though the news of Ben and Ana to share children has not surfaced on the internet, who knows they might be planning to welcome a child very soon.

Stay tuned and let's wish them best for further.

In the world of modeling, good and attractive looks define everything. So plastic surgery has played a significant role for models who aspire to get a perfect body. The gorgeous Ana Cheri got alleged of breast transplant after fans compared some of her old bikini photos with the new one.

Let's take a look at the comparison. 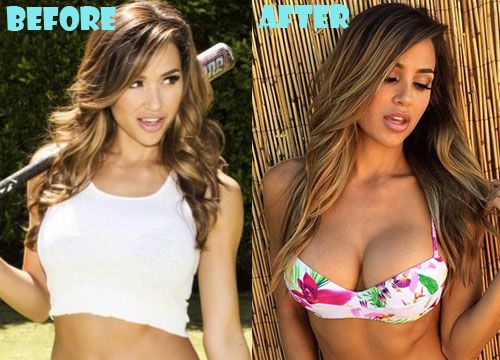 Fans also concluded that Ana had undergone nose work and lips implant. However, Ana herself has not opened up anything about the issue regarding the plastic surgery. Maybe, Ana did some touch ups on her appearance or maybe the rumored just aired baselessly.

Without a strong proof, no conclusion can be made.

Wishing Ana a lot of success!