Ariana Grande and Justin Bieber, hmmm, of course, they look cute together but are they really in a relationship? After the PDA stage performance, Justin seems to be hitting on Ariana Grande. And if we see the adorable kiss picture of Ariana and Justin that was shared on Twitter it looks like they are really having an affair.

However between these flirts what about the reaction of their partner. Justin Bieber is dating Hailey Baldwin whereas Ariana Grande has her own boyfriend Ricky Alvarez. What could really be the impact of the overflowing rumour of these two getting together or people claiming they look good together despite they have a different lover.

Is Ariana Grande in a relationship with Justin Bieber?

Ariana Grande and Justin Bieber while performing just couldn’t keep hand off each other. Seeing their performances one can hardly say that this star wasn't dating or couldn’t be dating in future as they just seemed too close. Right after the performance in the beginning of this year given by Ariana Grande and Justin Bieber people burst with comments saying that they must really have something between. Even Ariana's ex-boyfriend didn’t lack behind to tweet to criticise Justin Bieber. This event eventually broke up the love between them.

Currently Ariana Grande is in a relationship with Ricky Alvarez and Justin Bieber is with Hailey Baldwins but it seems like the rumour of Ariana and Justin didn’t quite affect their relationship. Even after this Justin and Hailey seems to be incredibly close with each other. And for the picture Adriana explains it was just a friendly kiss.

@justinbieber you're crazy and nonna says thank you, she loves you pic.twitter.com/C5DthoPIXl

It was when Justin was there to meet Ariana's grandparents, Justin asked for a snap and Ariana took her phone and gave a click. She explained to MTV, 'I just was smiling and he kissed me on the cheek. And I didn’t know what to do. I just walked out of the room. I got shy.' Later Justin posted the picture for which she says she would have never.

"this pool is haunted" "ok"

Later Ariana unfollowed Justin on twitter. According to the interview, she gave to Seventeen she says, ' I didn't! I actually didn't. I think it was like a glitch or something because I didn't." After a while, she talked again, 'No, I mean maybe he blocked me or something?' 'No… There's nothing to report. We haven’t spoken in months. He's a great guy. He's a great artist. We have a nice friendship. There's nothing going on.'

So now it looks like there is nothing going between these people and it was just a huge coincidence that eventually led both to unfollow each other o Instagram and twitter. They are still good friends but maybe after this incident their closeness may be little hampered. 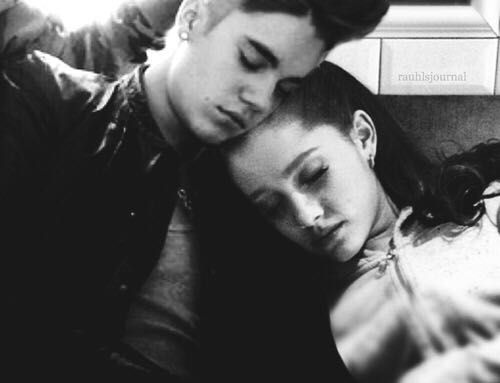