Frostsnow https://frostsnow.com/
Home Gossip Are William Levy And Elizabeth Gutierrez Back Again After Break Up? Their Relationship Details

Are William Levy And Elizabeth Gutierrez Back Again After Break Up? Their Relationship Details

The Cuba born American actor/former model William Levy gained a lot of media attention for his role as Christian in the Resident Evil: The Final Chapter (2016). The 36-year old actor who also appeared on the (ABC) American Broadcasting Company's dance show Dancing With The Stars is one of the successful faces in the Hollywood film industry. Though Levy is very successful as in his professional life, he has experienced a lot of misfortunate when it comes to his love life.

The news on the former couple's doomed relationship came as a shock for all of their fans. But one shouldn't blame the misfortune and has to move on in life. So, has Resident Evil: The Final Chapter star pulled himself out from the tragedy of the past relationship?

In case, William has moved on, who is he dating currently? Or is currently single?

Let's find out more about the love life of the American actor/dancer in details here in Frostsnow.

Who is William Levy Dating Currently? Does he have a Girlfriend?

In 2011, the news on the former couple, William and his gorgeous girlfriend Elizabeth shocked all of their fans. And ever since people are keen to find out about the relationship status of the American actor/dancer. After the year 2011, William hasn't been linked to any other names and there isn't any news on the actor's current relationship. Moreover, the actor has been secretive about his personal life after the breakup.

Well, if sources are to be believed, William is currently single.

Sometimes it's hard to let go the past and when it is about love, it becomes tougher. It is possible that William has the same story as he doesn't seem to in hurry to jump into another relationship post his breakup.

William and his former girlfriend, Elizabeth met each other for the first time in early 2003 on the sets of a Spanish TV series Protagonists of Novel 2. Soon after they crossed each other paths as contestants in June, they began dating. The couple dated each other for seven years and the couple also welcomed two children together.

The Former Couple William and Elizabeth: Parents of the two Children

The actor/dancer welcomed his first child with his ex-girlfriend in the 3rd year of their relationship- a son, Christopher Alexander (b. 2006).

William Levy with his first child, a son, Christopher Alexander (b. 2006)

In 2010, William and Elizabeth welcomed their second child, a daughter, Kailey Alexandra (b. March 6, 2010) who was the another addition of happiness to the family. 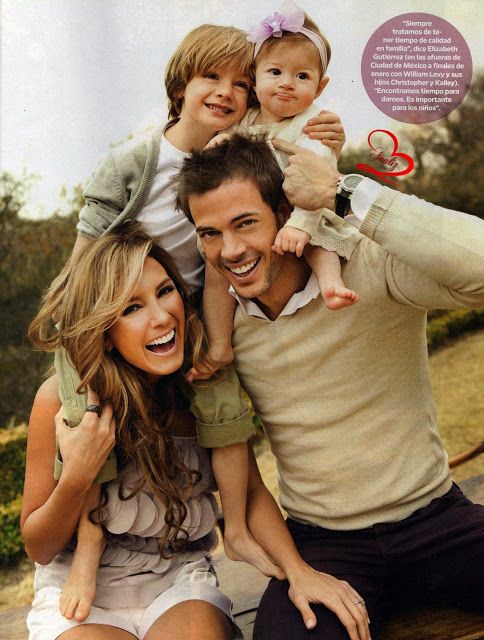 William and his ex-girlfriend, Elizabeth with their two children, a son, Christopher Alexander and their daughter Kailey Alexandra

In early 2011, the news on the couple separation aired just after William was alleged to be in a relationship Mexican actress/model Ximena Navarette who is also the Miss Universe 2010. He told the magazine,

Yes, we are separated, but not as a family and we also don't discard the opportunity to be together emotionally in the future, whether it's tomorrow, in a week, in a month or in a year, The time that [Elizabeth and I] have ended, we have ended on good terms. It's never been because one of us cheated, nor her or me; it's never been any of things that people or the media is planting.

Simply we have said: 'You know what? Let's give  ourselves  some time for the better of us and our children, for our mental health, for everything.

Well, post their break up, some thing came out that surprised all their fans. The couple was once again seen sharing their pictures together on their Instagram which further gave rise to questions regarding their relationship.

On September 29, 2015, William shared a picture of Elizabeth with the caption,

"Congratulations from # South Africa to you and all your friends [email protected] @gutierrezelizabeth_ @roxanagarciatv @karlamonroig @anakarinamanco @angelicacastro_ @beatriz11y24 @mariely_bricenoThey deserve it - beautiful, talented and excellent mothers! Very proud of you ;-) do not miss Friday and Saturday & Sunday 6 PM 8 PM ... please Arrive early" with an emoji.

On the same day, Elizabeth also posted a picture of her daughter with the caption,

"Your girls miss u !!! But we know you're out there killing zombies .. I mean working..to give us the best..thank u !! I am so proud of all your accomplishments and your amazing heart !! Your # 1 fans always TK and me [email protected]"

Your girls miss u!!! But we know your out there killing zombies.. I mean working..to give us the best..thank u!! U are an example that dreams come true to us and everyone that knows you.. So proud of all your accomplishments and your amazing heart!! Your #1 fans always T K and me!! @willevy

Following the post from the actor/dancer and his ex-girlfriend, Elizabeth, a lot of their fans assumed them to have patched up.

So, What is the reality? Were the couple back together again?

Are William and Elizabeth Together Again?

The moment the Instagram post came in the sight of the people, there was nothing but the speculations on the former couple's relationship. Lots of their fans believed that the couple had paired up again after the separation.

Later on March 8, 2017, William posted a picture of Elizabeth by the beach which further strengthened peoples belief about the couple that they had patched up. Check out the post.

"#Repost @gutierrezelizabeth_ With @repostappTo all my beautiful people who like to take care and stay beautiful here I leave this ;-). Love you all. I send kisses. · · ·
We are ready to assist you .. elygutierrez.com thousand thanks for the patience !! ♥ [email protected]_elybeauty #beyoutiful #skincare".

Four months after the above post, Elizabeth also shared a picture of themselves, all in smile together. The post was another evidence for people to support their speculation.

Well, despite all these rumors, neither of them has opened up about their reconciliation. Further, nothing on their current relationship status can be said until they themselves come up to open up on the matter.

Let's hope, they address the rumors and reveal to the public about their relationship in case they are really back again.

For more updates on your favorite celeb keep in touch with Frostsnow.