Frostsnow https://frostsnow.com/
Home Gossip Are Scott Mescudi and Michelle Trachtenberg Dating? Are They Engaged? Details on Their Relationship

Are Scott Mescudi and Michelle Trachtenberg Dating? Are They Engaged? Details on Their Relationship Scott Ramon Seguro Mescudi, professionally known by his stage name Kid Cudi is a rapper and actor based in the United States. Kid Cudi, who is also known for his frequent collaboration with his mentor-rapper Kanye West got his breakthrough through his song Day 'n' Nite. Moreover, the rapper has collaborated with numerous other artists like Rihanna, David Guetta, Snoop Dogg, Drake, and also accompanied Lady Gaga during her tour.

The 33-year-old who is a proud owner of a Grammy Award under the category Best Rap/Sung Performance was also the face of brand Coach, Inc. in 2016. Besides, he has also worked with numerous other clothing brands. Let's take a look at Kid Cudi's past relationships and current affairs.

Kid Cudi Past relationships and marriage

After gaining attention from media, Kid whose estimated net worth is $5 million was spotted with Amanda Bynes in 2010. Amanda is known for her work in The Amanda Show. Their dating life was very short-lived as they parted their ways after a month of dating.

The same year, he started dating American activist Jamie Baratta. They began dating in May of 2010 and dated for two years before they broke up in Dec 2012. 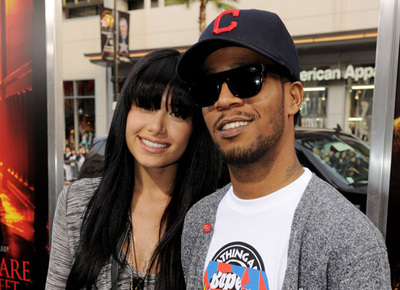 After his break up with long-term girlfriend Jamie, the rapper started to date actress Stella Maeve. They were seen together numerous times. However, they called it quit the same year. Moreover, the rapper has also been rumored to have dated Mariel Haenn in 2013. Source: When Rap Was Real

Kid Cudi is the father of a child. His daughter Vada Wamwene Mescudi was born on 26th March 2010.

Kid Cudi's relationship with girlfriend Michelle Trachtenberg. Are they engaged?

Rap artist Kid is currently in a relationship with actress Michelle Trachtenberg, best known for her portrayal of Nona F. Mecklenberg in the TV series, The Adventures of Pete & Pete. Michelle was previously in a relationship with American Musician Josh Groban. Moreover, the actress is also recognized for her encounter with actor Jason Segel, Jason Lewis, and Canadian Ice Hockey Player Brandon Prust

The two started dating in April of 2014, but they kept the relationship a secret until they were spotted together in a car. They are still in a relationship, and not much information about their relationship is known.

The duo is not engaged nor are they married. Actress Emily Deschanel married to David Hornsby in 2010; Their Married Life and Children