Are Kaia Gerber and Fenton Merkell Dating? Also Know Her Affairs and Relationships Kaia Gerber is a 16-year-old professional fashion model and actress. The daughter of the renowned model and actress Cindy Crawford,  Kaia seems to be following her mother's footsteps. Sister Cities, released in 2016, is the only movie she has acted on, but she has done numerous modeling projects for magazines such as Vogue, Teen Vogue, and Pop Magazine.

The teen model is reported to be dating another budding model named Fenton Merkell, who is the son of British soap royalty, Patsy Palmer. Fenton is just a year older than Kaia and models for the LA modeling management, The Dragonfly Agency.

I MUST BE DREAMING. to @vogueparis and everyone who made this cover possible... THANK YOU! ?? and to @emmanuellealt and @davidsimsofficial, you made me the happiest girl in the world. ?? SO MUCH LOVE

To know more about how the lovely teenagers started dating and hows their relationship is going, continue to read below.

Beautiful Kaia and Fenton were introduced to each other by their mothers, who are friends. The bond between Cindy and Patsy grew when the soap star Patsy moved to Los Angeles along with her entire family.

Talking about them, The Sun reported:

Fenton and Kaia have been close pals for a while through their mums' friendship and in recent months it has grown into something more... It's very early days but they have grown close and seem very happy together."

The young couple is working hard to establish their name in the modeling world. The common goal might be the reason why the two have grown so close.

Despite the closeness, neither of them have officially announced that they are in a relationship.

Kaia Gerber's Past Affairs and Relationship

Besides the alleged relationship between Kaia and Fenton, there have been no other reported affairs of Kaia. Meanwhile, when there are tons of speculations regarding Kaia and Fenton romantic affair, the model's mother claims that Kaia is single. The supermodel mom, Cindy once said,

I feel like she hasn't really gone on an official date yet. She did go to prom with kind of a friend, but she hasn't had, like, the first boyfriend yet -- and if Rande and Pressley have anything to say about it."

Even though Gerber has never officially dated anyone, she has several times been spotted spending lots of time with male friends. This might also be the reason, speculations regarding her relationship swirl on the internet time and again. 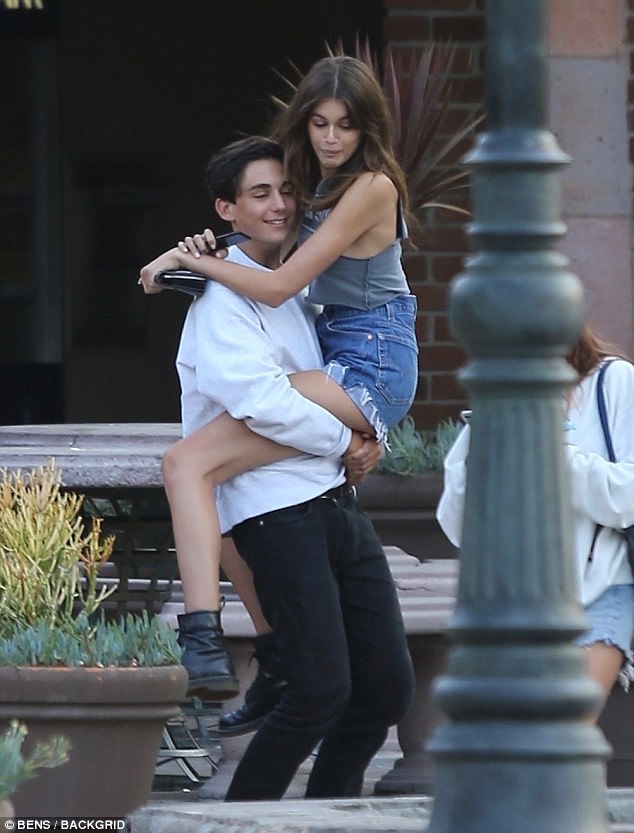 The photos of Kaia with her male companion clearly shows that she is pretty close to the guy but many have insisted that they are just good friends.

Hope the reports of Kaia dating Fenton are true, and they soon announce the relationship officially. The two certainly look lovely together and make a great couple.