The Scary Movie star Anna Faris and Chris Pratt have been married for 7years now and are one of the most adorable couple in Hollywood. But before finding Pratt, Anna had tied the knot with Ben Indra and the two got separated in 2007.

The funny actress met the Guardian of the Galaxy star Chris in early 2007 in Los Angeles during the table read of Take me Home Tonight. In the movie their character was love interests. After that the two started dating and got engaged in late 2008.

On July, 2009 the pair exchanged their vows in a small ceremony which held in Bali, Indonesia. Since then the couple have led a very happy life. Faris and Pratt have a very unique relationship and often they post very funny pictures of each other on their Instagram.

But they sure look like they are having a time of their life.

Grateful for so much, not the least of which is this four day weekend with my family. Loaded the truck, took the wife and boy on a road trip to a beautiful destination in the woods. A big shout out to everybody who can't be with their families because they're overseas serving their country. We salute you and give you thanks. #Family #Thanksgiving I forgot to photo credit Jaimie Trueblood

On August 2012 they were blessed with a son who would call Feris Ma and Pratt Daddy. They named him Jack. Although Jack was nine weeks premature and had to spend a month in the hospital, he has grown up to be a healthy little boy.

Pratt has posted a photo of his son on Instagram with a very sweet caption. He wrote "I snapped this photo and it dawned on me how much Jack looks like Anna. They are both so beautiful. Sleeping in with the two of them is my greatest treasure."

This morning Jack found a rainbow on the wall. I honestly couldn't figure out where it was coming from which according to science means it's some sort of portal. You ever see Stargate? Exactly. We were careful not to get too close. I snapped this photo and it dawned on me how much Jack looks like Anna. They are both so beautiful. Sleeping in with the two of them is my greatest treasure.

Well Pratt and Faris both are very lucky indeed and they have definitely proven that such a thing called soul mates exist in the world.

But before Faris had found her Mr. Right she bounded in the marital bond with Ben Indra. They were married in June 2004. After their marriage, Anna was getting lead roles and her career was just taking off but her ex-husband’s was failing.  Anna in an interview revealed that her success led to a divorce between them.

Faris filed for divorce in 2007 citing irreconcilable differences as they just parted away with her fame. It was finalized in February 2008, as part of an divorce agreement Anna had to pay $900,000 plus other property and acting royalties. 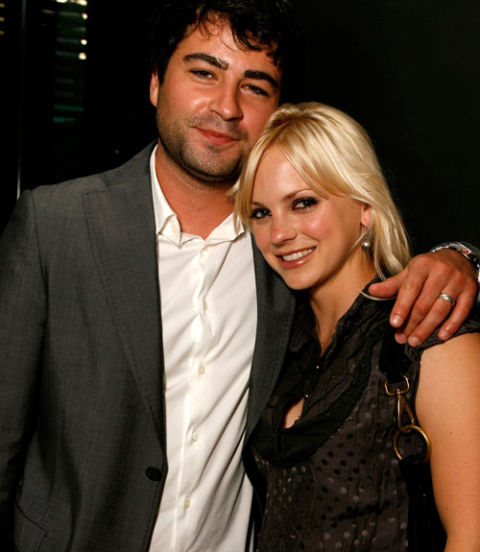 Following her split with Ben, the blonde actress really celebrated her single life. In an interview with Marie Claire Magazine, Anna said "I was like, F--k it, I've got nothing to lose, nobody to support,” after her divorce. She enjoyed her single life by becoming a fixture on Hollywood party scene.

Anna Fray before and after undergoing plastic surgery.

Faris said that she even underwent cosmetic surgery to enhance her boobs. She told the New Yorker that the breast implants wasn’t a career thing but rather a divorce thing.