American Gymnast Shawn Johnson Suffered A Miscarriage, Who Is Her Husband? Her Married Life Former American Olympic gymnast Shawn Johnson and husband Andrew east revealed a heartbreaking news in a video they posted on YouTube after she underwent miscarriage.The couple who were six weeks into their pregnancy titled their video clip ‘pregnancy + heartbreak’ in which they explained the heartbreaking news to the social media.

To know more about this catastrophic and upsetting explanation of Olympic gymnast Shawn Johnson’s miscarriage, read the article below.

Shawn Johnson and her pregnancy

The pair passed through an emotional turbulence as the couple learned that they were unexpectedly pregnant.

In a 21 minute video on YouTube, Johnson said that It had been an emotional roller coaster. She also added,

A few days after she found out that she was pregnant, she started experiencing complications, and she suffered a miscarriage. After a couple of days, they documented the entire emotional outburst from pregnancy test to losing their first unborn child.

Johnson also captioned the video she posted ‘The past 48 hours have been some of the happiest, scariest and saddest times of my life’.  She said that she has been crying more than she had ever before. However, the couple is looking forward for what is next to come.

“pregnancy + heartbreak”. New video is up on our YouTube page. Link in bio above. This is by far the hardest video we’ve ever posted but we felt as though it was a story that needed to be shared as so many struggle with the same thing. @andrewdeast I love you more than anything in this world and I know you are going to make the greatest Daddy in the world someday. Thank you for being my rock through all of this.

At first, when they got the good news about the confirmed pregnancy, they were scared. In fact, they also questioned themselves if they were ready for this. But later the couple talked about the pregnancy and was excited to start a family. After the tragic turn, they have given an optimistic view on future and said that they are going to start a family soon. The couple also revealed a pair of baby shoes in the clip and vowed that they would ‘Use them again.'

In case you are wondering about her net worth, then you should know that it is $9 million. 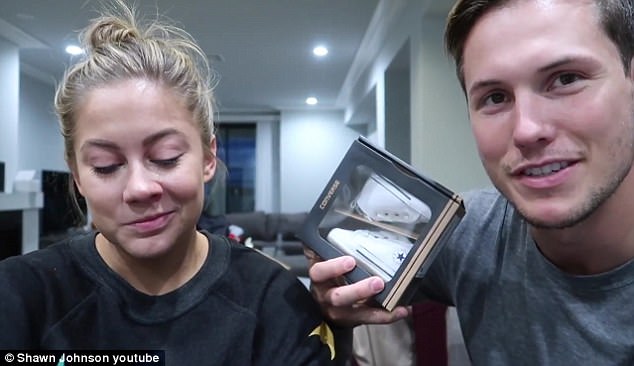 Shawn and her spouse showing the pair of shoe

After all this emotional ups and downs in Shawn and Andrew’s life in a matter of 48 hours, we hope that they give a new start to life. They are also thankful for their fans who supported them in this hard times.