American actress Amanda Peet Married David Benioff in 2006, Is their any divorce rumours?

The 45 years old American actress, Amanda Peet is married to the co-creator of the award-winning series Game of Thrones David Benioff. Amanda is best known for her role in the movie The Whole Nine Yards and the TV series Jack and Jill.

Stick with us, today we are going to provide you with all the details about Amanda and David's married life, children, and divorce rumors.

Must Read: Tom Wlaschiha: Actor of Game of Thrones.

Amanda met her husband David through her manager

Amanda met her long-term husband David in the beginning of the year 2006 when Amanda was dating someone else at the time. It was her manager who introduced the Screenwriter David and asked her if she wanted to go on a date with him. That was the time when Amanda and David met each other.

David was already the fan of Amanda by her performance in the movie The Whole Nine Yards. He used to frequently watch her movies and series.

Amanda married her husband David after he proposed her

Amanda dated David for few months after their meeting and in September 2006, David proposed Amanda for marriage and she accepted the proposal.

On 30th September 2006, Amanda and David tied the knot in New York City in the actress's alma mater, Friends Seminary, a Quaker school.

Including all of the relatives of the couple, actor Mark Ruffalo and his wife, and actress Elizabeth Berkley and her husband were also there to bless the bride and groom.

Amanda was pregnant in her wedding

Amanda was four months pregnant at her wedding with her husband David. In the wedding, the couple announced that they were excepting a baby in their wedding. 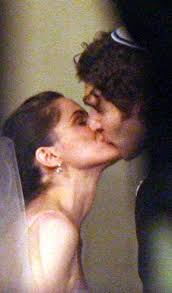 Amanda and her husband David in their wedding

On February 20, 2007, the couple welcomed their first baby boy and named him Frances "Frankie" Pen Friedman. Oh, don't get surprised about his last name Friedman because David uses his mother's name as his professional name.

Amanda and David gave birth to other two children

Amanda and David gave birth to their second child, daughter Molly June Friedman in 2010. Maybe the couple is fond of children so, in the fall of 2014, Amanda announced her pregnancy and was seen in many functions flaunting her baby bump.

Amanda Peet and her three children

Amanda and David gave birth to their third child Henry Peet Friedman on December 6, 2014. The couple is spotted in with all of their children in many places.

Amanda is a huge fan of the TV series Game of Thrones. She is such a huge fan that on the death of Jon Snow she threatened her husband that she would give him a divorce.

The couple loves each other very much, but when David did not tell about the secret of Jon's death to Amanda, she was very mad at it. However, Jon Snow is alive now so you can say that Amanda brought him back. If you don't know, everyone is scared of their women. Truth!!! and David you have proved it.

David loves his wife so much that once in Emmy awards he did not stop calling her name and was trolled about it by his fans.

David's fan tweeted about his behavior.

The love of David's life, his wife Amanda is supportive of her husband and believes that they can do even an impossible task if they are together. Who can not respect this adorable yet strong couple? We wish them all the very best for their future.

Who is Tyler Scheid Dating? Rumored to be Gay? Know his Affairs and Relationship