We all remember gorgeous and hot Alexis Bellino from “Real Housewives”. Well! if you are wondering about her relationship status then let us inform you that she is a married woman. Her husband is Jim Bellino. This couple has a son and twin daughters together. Even though this couple has been a loving parent to their children, they have had an oops moment in the past. 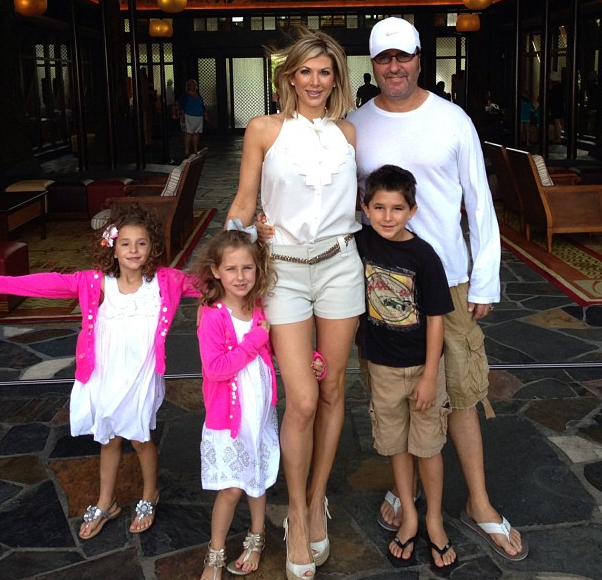 picture: Alexis Bellino with her husband and three kids

We all know how tough it is to take care of twin children when you already have a son to look after. Maybe, that’s the reason Alexis and Jim mistakenly drowned their twin daughters into the pool. Yes, you have read it right. But, this whole incident was an accident. In 2010, Alexis Bellino and Jim were attending a Fourth of July BBQ at the Balboa Bay Club in Orange County. That is when they left their twin daughters in their stroller without the brakes on. Eventually, the stroller rolled into the pool. However, nothing serious happened as her husband Jim immediately jumped into the pool and lifted them up before the girls’ heads got drowned.

#bellinofamilyvacation (And before any of you negative people comment, no I didn't do anything to my face. I had a double eye infection this entire vacation, so I'm not wearing eye makeup.??????)

When Alexis was asked about the incident, she described it saying, “On Sunday, July 4th, my family was leaving the Balboa Bay Club swimming pool in the late afternoon. As we were leaving, I turned to say goodbye. Our girls were in their stroller and I thought I had put the brake on, but apparently, I didn’t. My husband, Jim, and I were both standing close to the stroller. Within seconds, the stroller had rolled towards the pool and a stroller wheel rolled off the edge of the pool. Before either of us could grab the stroller, a second wheel rolled off the edge, and the stroller went into the pool. Of course, Jim instantly went into the pool. He grabbed both of the girls himself and lifted both of them out of the water. Because the girls were not strapped into the stroller, and Jim was right there, their heads did not even go under water." picture: Alexis Bellino with Jim Bellino during an event

Well, we see how caring father Jim is. Jim and Alexis got married in 2005. Their elder son’s name is James and twin daughters’ name is Melania and Mckenna. It has already been a decade of their married life together. But still, this couple looks crazily in love with each other despite their huge age difference. So many people believe that Alexis Bellino married the older Jim Bellino for his money. Regular viewers of RHOC say that Jim does not always behave well to Alexis. He treats her as a young and immature brat. But, we seriously cannot make any comments on that because Alexis has perfectly managed to show the media that her husband and kids are her everything.

During their 10th marriage anniversary, Alexis posted a photo on her Instagram showing her 10 karat diamond ring gifted by her darling husband Jim Bellino.

It's a #belair kind of day @berilakcay #sugarbabelosangeles #nails #nailart

Since Alexis has not been linked with any guy after her marriage, we can say that she is not involved in any affairs and this perfect couple are not getting a divorce either.