A new poster for the David Yates's movie "The Legend of Tarzan" has been released on Tuesday(May 24), where talented Swedish actor Alexander Skarsgard is showing off an incredibly chiseled body with his co-star Margot Robbie who will play the role of Jane. The poster with tag line "Human.Nature" shows Alexander standing shirtless in front of Robbie in the jungle, surrounded by large apes with rain drizzling all over. 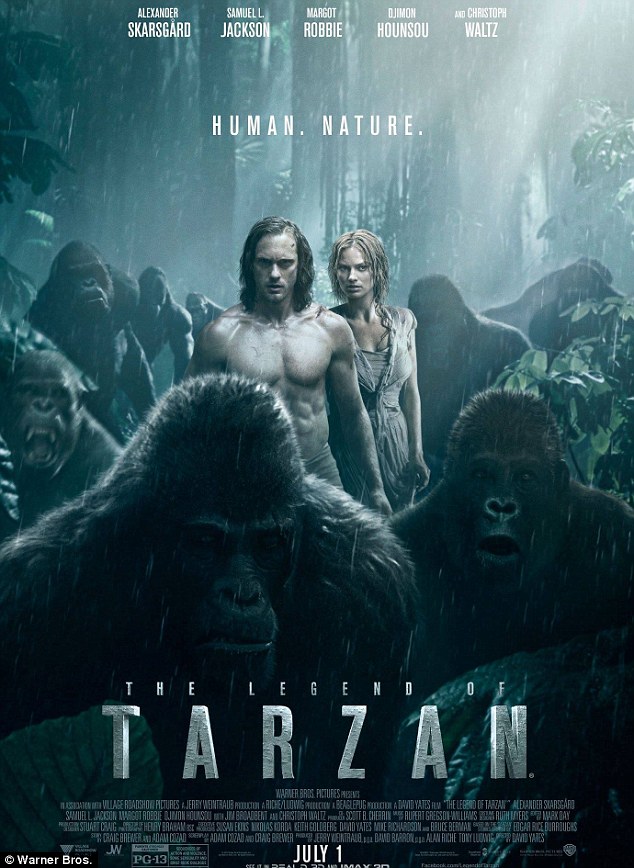 Alexander Skarsgard faced lots of challenges to make fantastic chiseled abs for the role of Tarzan in the movie. Skarsgard, best known for his role as vampire on the HBO series 'True Blood', has done pretty hard work for his upcoming movie.

“I obviously had a very, very good trainer. I basically had him and a nutritionist. I’ve never done anything like this before, this extreme. I was just really nervous. It was a big challenge and I didn’t know how my body would respond to the training and diet.”, Skarsgard revealed  e-online.

Skarsgard also mentioned that he had a lot of chicken cutlets and crunches to digest before and while shooting for several months.

The Sweden's sexiest man is not married yet but he was dating an English fashion model, Alexa Chung. Rumors suggest that they are set to marry. That really means he is not divorced too. Skarsgard has a net worth of $12 million.

Alexander Skarsgard faced lots of challenges to make fantastically chiseled abs for the role of Tarzan in the movie. " The Legend Of Tarzan" is set in London years after Tarzan left the jungle and settled down with his wife Jane. He is compelled to come back to the Congo as an representative and conflicts with a Belgian captain played by Christoph Waltz who has devious outlines in his previous home.

The movie with the cast including Samuel L Jackson, Djimon Hounsou, John Hurt and Jim Broadbent, is scheduled to be released on July 1, 2016. All the stars have done terrific work in the movie.Hope for the better response of people all around the world.

Welcome to the jungle! Get an exclusive look at Alexander Skarsgard in 'Legend of Tarzan': https://t.co/2c7sxOwgt4 pic.twitter.com/bHJ3EGLdAr