A famous American actress, songwriter, singer as well as a comedian, best known for her scream and shouts "Oh, Snap!”, Raven-Symone has revealed herself as a lesbian as she once had an affair with a model and actress AzMarie Livingston. This news has been making headlines and has considerably gained wide attention and curiosity.

Is Raven-Symone actually a lesbian? Was she really dating the actress AzMarie Livingston? If yes, then why she split from AzMarie? Along with these, there arises a lot of questions regarding Raven-Symone's personal life. Well, we know, as a fan you must be really curious to be answered to all the queries. Don't worry, we are here with all the answers. Just stay with us.

Raven-Symone revealed herself a lesbian bombarding her tweets

Until she reached 27, the rumor regarding Raven-Symone being a lesbian was a well-speculated fact but there was no any authentic proof but the actress came out of the closet recently.

But, when Raven-Symone revealed herself as a lesbian towards the media and public with a tweet on her twitter account, by being excited about a gay marriage after the government of America permitted the gay marriage in the country in 2013.

I can finally get married! Yay government! So proud of you

Before expanding bombshell statement on Twitter, Raven was referring to the US Supreme Court's decision to overturn the Defense of Marriage Act in June 2013.

And when the gay marriage was legalized in states she reacted on this saying;

"I am very happy that gay marriage is opening up around the country and is being accepted. I was excited to hear today that more states legalized gay marriage. However, I am not currently getting married, but it is great to know I can now, should I wish to."

This statement clearly proves that The Cosby Show Star is actually gay. Moreover, In May 2012, Raven-Symone had addressed a National Enquirer story that she has an affair with her girlfriend AzMarie Livingston who is an America's Next Top Model contestant, in New York City by tweeting a cryptic message about the tabloid story.

I am a light being made from love. And my career is the only thing I would like to put on display, not my personal life. Kisses!

However that is my right as a HUMAN BEing whether straight or gay. To tell or not to tell. As long as I'm not harming anyone.

My sexual orientation is mine, and the person I'm datings to know. I'm not one for a public display of my life.

I'm living my PERSONAL life the way I'm happiest. I'm not one, in my 25 year career to disclose who I'm dating. and I shall not start now.

Thus, it is so clear that the Cosby Show Star, Raven Symone who has been tight-lipped about her sexuality took Twitter to address the rumor swirling that she was a lesbian and dating her girlfriend.

When she did open up on Oprah's "Where Are They Now?" in 2014, she said she preferred not to be labeled with any one sexual preference.

Video: Raven-Symoné: "I'm Tired of Being Labeled" | Where Are They Now | Oprah Winfrey Network

Raven-Symoné and AzMarie Livingston both as being the actresses has guest-starred as Olivia Lyon and Chicken, respectively together on the FOX hit Empire.

AzMarie also appeared as a contestant on America's Next Top Model: British Invasion in 2012. Also, as we already said that Raven-Symone is best known for her scream and shouts "Oh, Snap!”, let's have a look on it which was shared by Raven herself on her Instagram account.

It was all going right, the relationship between the couple, Raven-Symone, and AzMarie Livingston lasted for about three years but recently the news of their separation got viral and became one of the best-gossiped topics in Hollywood town. Recently the former couple is completely over and separated with each other.

The couple has been together since 2012 and it is currently unclear as to why Raven-Symone and AzMarie Livingston decided to end their relationship; the exact reason behind their break up is not revealed yet. 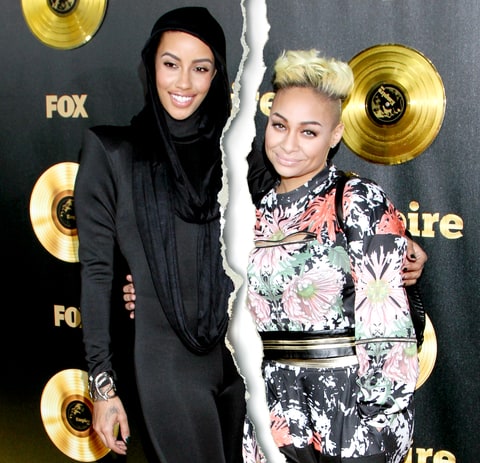 Though $ 50 million net worth actress Raven-Symone recently faced downfall in her relationship with AzMarie, let's hope the two can remain friends or at least be cordial with each other. After all, both Raven and AzMarie work in the same industry, so it is possible for the two to run into each other every now and then. We wish them all the very best for their future.

Mary Lee Harvey Divorced Husband Steve Harvey In 2005, Is She Dating A Boyfriend? Her Married Life