Frostsnow https://frostsnow.com/
Home Gossip Actor Thomas Kretschmann Is In Relationship with Brittany Rice, Are they Engaged? Past Affairs

Actor Thomas Kretschmann Is In Relationship with Brittany Rice, Are they Engaged? Past Affairs German-born actor Thomas Kretschmann is currently 55-years-old and has been active in the film industry since 1985. Best known for portraying the role of Lieutenant Hans on Witzland in film Stalingrad, he is also recognized for his appearance in Marvel Studio's Captain America: The Winter Soldier and another Marvel's movie Avengers: Age of Ultron as Baron Stucker. Moreover, he has won numerous awards like Max Ophuls Festival Awards, Bucheon International Fantastic Film Festival Awards and others.

To date, he has appeared as different characters in numerous films like 1997's Prince Valiant as Thagnar, 2003's 24 as Max, 2015's Hitman: Agent 47 as Le Clercq, etc. alongside actors like Rupert Friend, Zachary Quinto, Robert Downey Jr., Scarlett Johansson, and many others. Moving on to his personal life, the actor has been dating bombshell Brittany Rice since 2011.

They have been together for seven years, and their fans are inquisitive if Thomas has popped the question to his sweetheart. Unfortunately, he has not done it yet, and they are not engaged yet. It is safe to assume that he is waiting for the right time to do it.

Below we are going to share with you some interesting information about the couple's relationship and Thomas' past relationships and children.

Thomas is currently in a relationship with actress Brittany Rice, who has appeared in a few minor roles. Moreover, Thomas who is already a father of 3 from his previous relationship started dating Rice back in May of 2011. Throughout the years, they have appeared together at numerous events. It is almost 7 years in their relationship and their fans are very disappointed that they have not gotten engaged or married yet. Well, their fans will just have to wait and be patient with them.

As mentioned above, Thomas has three children from his previous relationships. Before getting indulged with his current girlfriend, he was in a relationship with two other women. His first and infamous relationship was with Russian Production Manager Lena Roklin. They started dating back in 1997. Together they have three children. Their first child Nicolas who is currently 20-years-old was born in 1998. Their second child, Stella is currently 19-years-old, and she was born in 1999. Finally, in 2002, their youngest child, Alexander was born and he now 16-years-old. 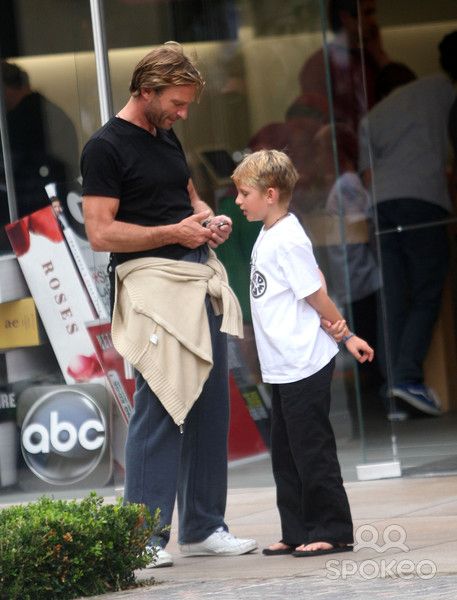 Thomas Kretschmann with his son

Their relationship seemed stable, and fans thought that they would get married and live happily ever after. But 12 years into their relationship, they decided to call it quit and separated in March of 2009. Not long after his separation with long-term girlfriend Lena, he started dating German model Shermine Shahrivar. They started dating in January of 2009, but the relationship did not last long. They broke up just a year later in June of 2010.