Frostsnow https://frostsnow.com/
Home Gossip Aaron Rodgers is in relationship with his girlfriend Olivia Munn. Are they planning to get married?

Aaron Rodgers is in relationship with his girlfriend Olivia Munn. Are they planning to get married? NFL’s football player Aaron Rodgers is dating actress Olivia Munn who is also a renowned model. This pair has been together for two years but they haven’t tied the knot yet.

Let’s find out more about the couple’s affair and controversies.

During an interview with Entertainment tonight, Munn said,“Well, I’m wearing a ring on my left hand right now, but as my publicist, Marcel, will say, ‘When people ask, ‘Why is she wearing a ring on her left finger?’ he says, ‘because she has a finger there!'” She further explained, “No, [it’s not an engagement ring]. The other day I was eating… I had been eating too many salty foods, so it didn’t fit. It’s my emerald ring that I wear all the time on my right hand and I had to put it on my left because my right hand was getting too swollen!”

There was a rumor which said that Munn was quite disturbed after the engagement announcement of Rodger’s brother, Jordan, with Jojo Fletchers.  A close source revealed to OK! Magazine, “Let’s be clear here, Olivia has been waiting for almost a full year and [Aaron Rodgers] hasn’t proposed. She’s privately quite bitter and is starting to think it will never happen because Aaron’s so scared by this rift with his brother and the last thing he’ll want to do is follow in his footsteps.” 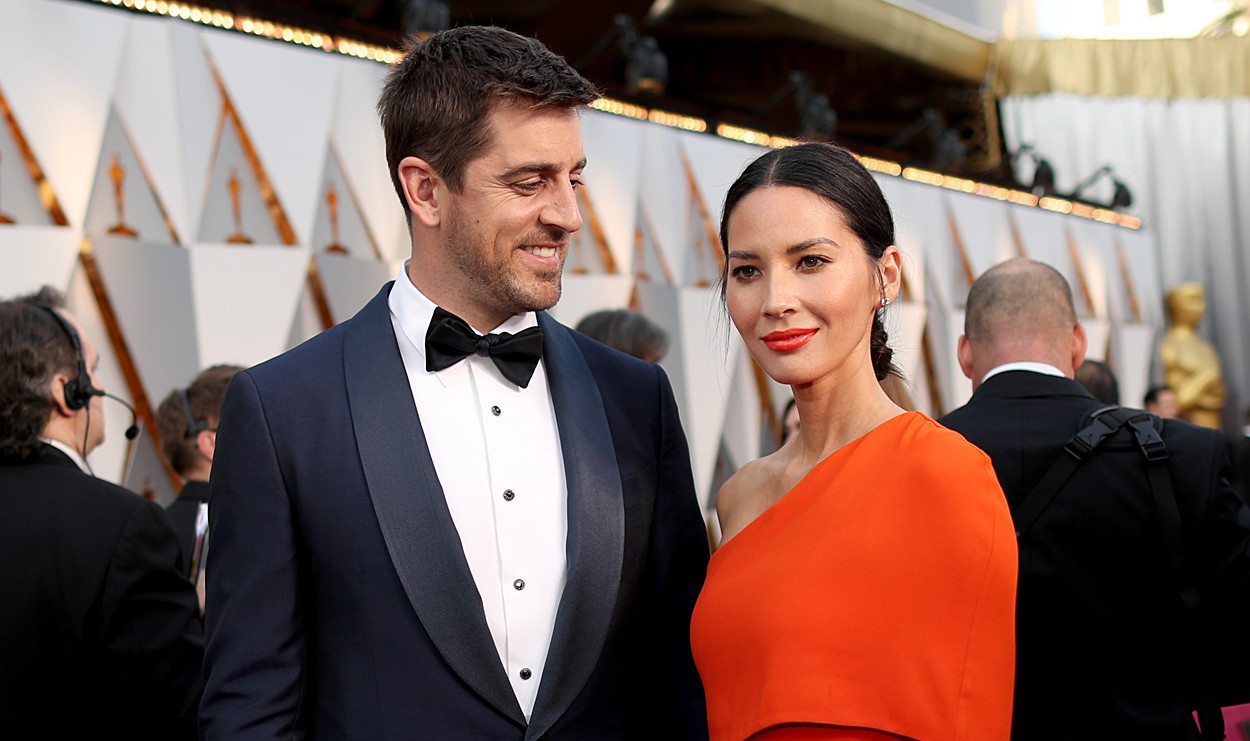 An inside further said, “A dream of hers to be proposed to be mature and opt for a commitment. He’s not gonna do a lot better than her and it isn’t fair to her to keep her waiting.”

However, Munn has ignored such rumors and gossip about herself and has stayed positive about her relationship with Rodgers.

Aaron Rodgers doesn't talk to his family because of Olivia Munn

Rodgers and Munn’s relationship seems to create quite a trouble in Rodgers’ family as well. Rodgers hasn’t talked to them since past two years. According to US Weekly’s report, an insider revealed that Rodgers and his family’s sourness is because his family doesn’t like Munn.

Despite the family feud and not being engaged, Rodgers and Munn have been going well in their relationship. They went public about their affair since the very beginning. They appear at several red carpet events together and both complement each other very well.

What do you guys think about Aaron Rodgers and Olivia Munn’s relationship? Please, leave a comment.